So I made it to Boston this weekend for PAX East 2013. I had a fantastic time, and I spent most of it in the game room. So here is everything I played, and what I thought of it.


Cards Against Humanity - Fun but could have used a lower win threshold for greater numbers of players. The card combos can be very well timed and sometimes people read more into the cards than a person may have intended, which is always hilarious. The best cards are the doubles. The single cards leave a lot to be desired after a few great doubles.

Zombicide - Looked great. Rules were very ambiguous and poorly worded. We may have been playing correctly by the end. Didn't get deep enough in the game to have a good impression. Amazing production quality. 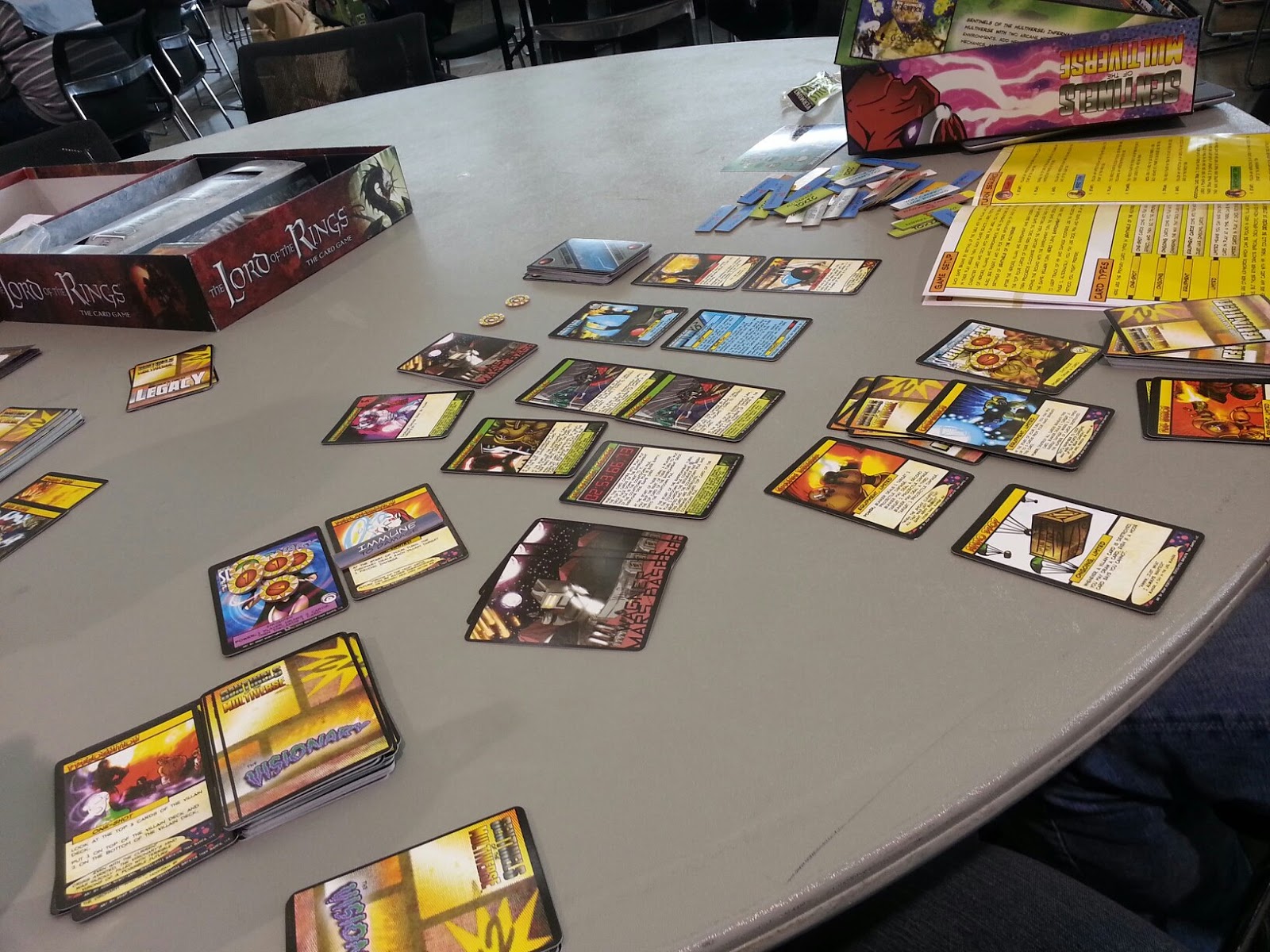 Sentinels of the Multiverse x2 - Very fickle and complicated game state. Even with a veteran player, we weren't sure we played it 100% right. The extra game state tracking tokens in the enhanced edition help, but I wonder how streamlined the design would have been if the game had been designed around them in the first place. 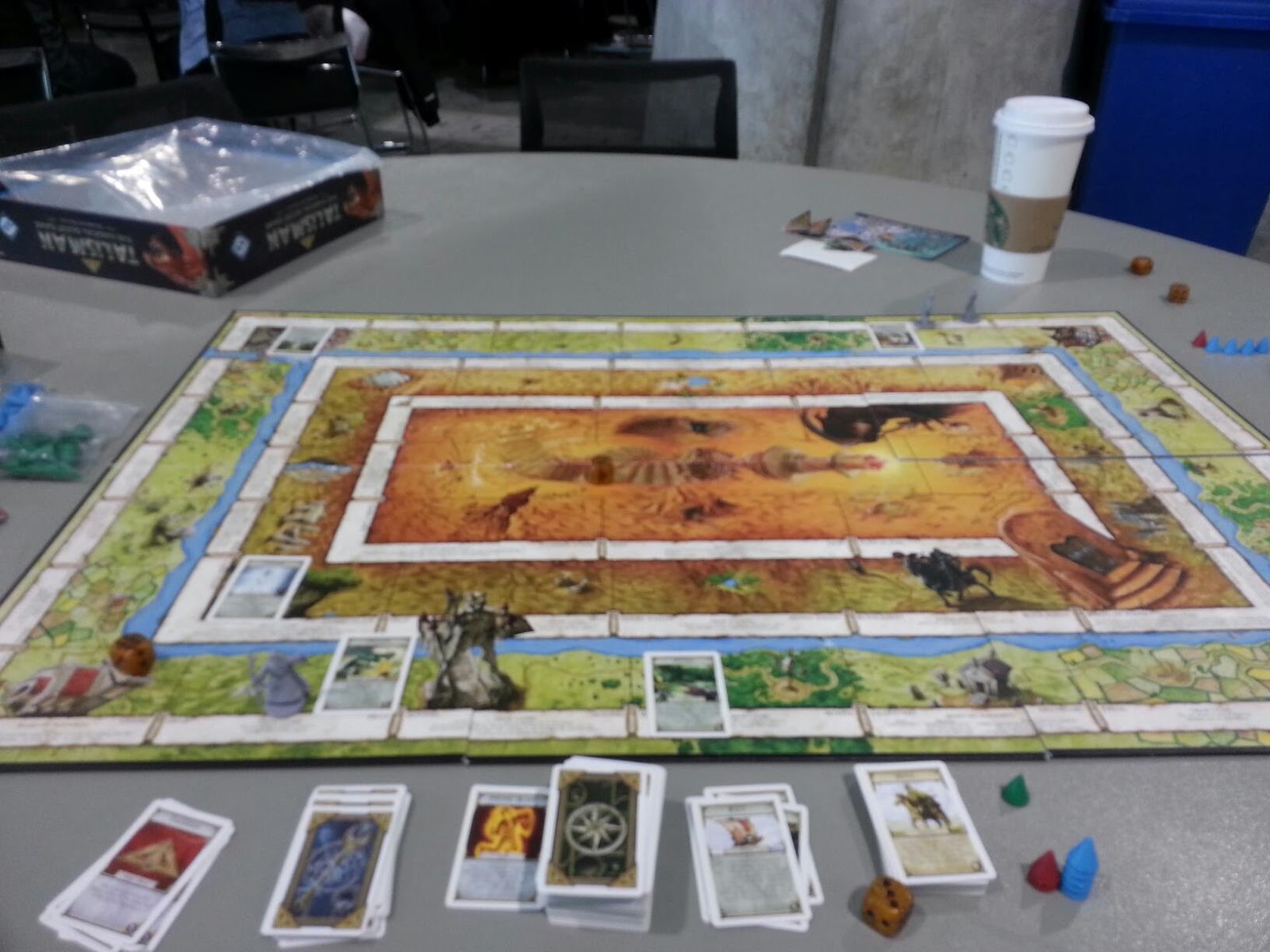 Talisman - Definitely an artifact of an earlier time. Little guidance in play. Feel like the game should have more pointers on how to play or a default "Go to town" action. Needed reference material for the key spaces on the board too. We just weren't sure how to effectively proceed, and the board, cards and dice were just not cooperating. 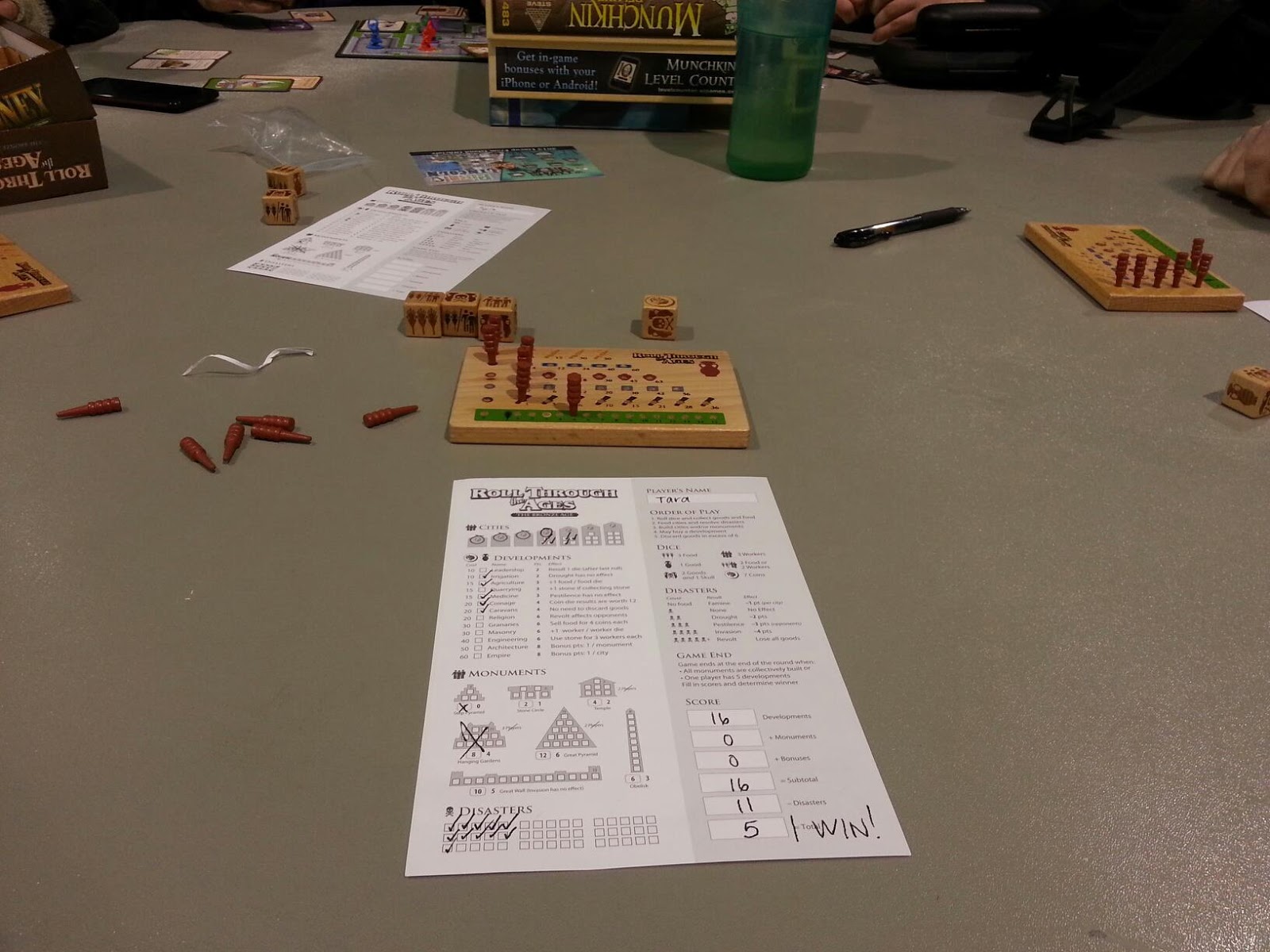 Roll Through the Ages x2 - Can't believe I never played this before. Great easy dice game with diverse options for what it is. Really appreciate the developments. Being limited to 5 really drives the game forward, and you are torn between building up your cities and developments, or focusing on monuments hoping the game lasts that long. Look forward to exploring it more. 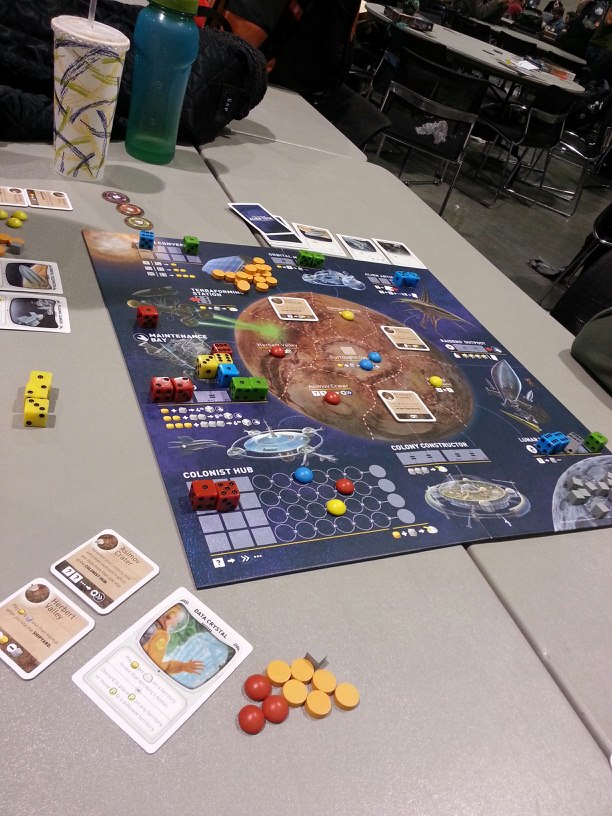 Alien Frontiers - Well balanced worker placement locations. The raiders can seriously slow the game down however. It balances well with the numbers of ships it eats up. But I feel like it could have been balanced better with the number of players too. Ore was a hot commodity, frequently being targeted by raiders. I think it encourages a gang up on the loser scenario though since a person trailing badly cannot get and then spend their ore in a single turn. It's always around to be stolen by the other players, and it likely will


Zombicide - Played the game more correctly this time. Getting the buildings correct greatly sped up play and made it more interesting. Rolled extremely poorly and died. Should not have gone off on my own. Have a feeling it would get old fast. Almost entirely luck driven. And player elimination sucks. I think I prefer my coop games a bit more deterministic. Not sure how it scales to the number of players?

X-Wing Miniatures - Really enjoyed this one. The hidden movement phase is great. Actions help with the anticipation and bluffing factor. Seems like tons of variety in a small box. Miniatures are of incredible quality.  Ordered this the same night off CSI. 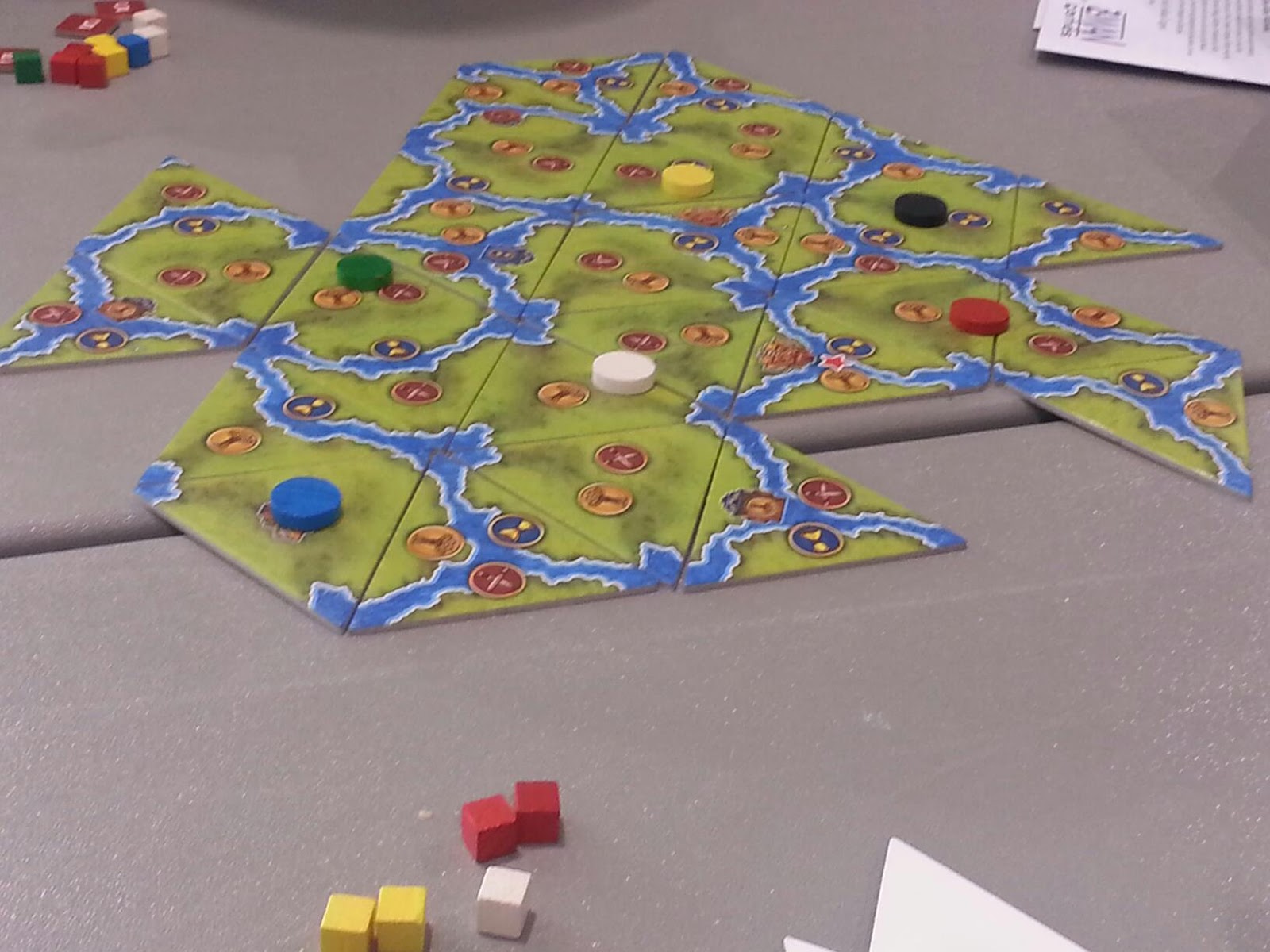 Gheos - Had a very Acquire feel. Didn't use the migration or warfare much. Would have likely been a deeper game if we had. We were so worried about all the different scoring methods we didn't pay attention to hamstringing each other. All in all a bit flat. Was an enjoyable enough game but perhaps a bit too abstract. Theme was very loose. 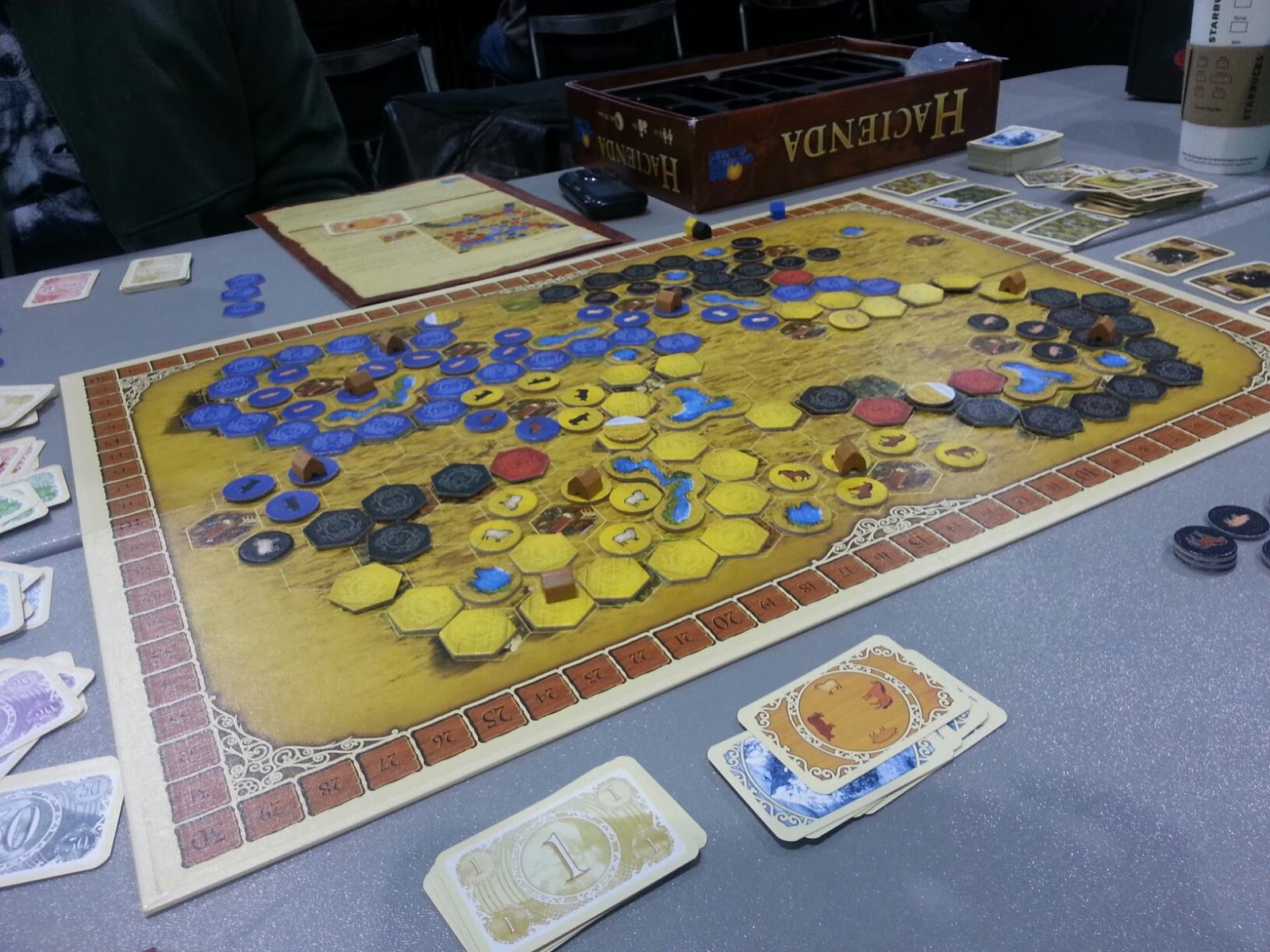 Hacienda - Felt a lot like Ticket to Ride with more meat on the bones. Had a good economy. We didn't play to block much but I can imagine the game getting vicious. Money was plentiful. We mostly had super large fields. Harvesting was one shot since we never used up all the tokens. It had a very refined ruleset. Lots of smoothed over edges. Like terrain cards that are used up becoming fields. And the animal deck scaling to the number of players. Did not care for how the land ownership tiles were done. Introduced the combinatorics problem that Commands & Colors suffers from.

Carnival - An interesting light little card game. Has lots of stealing and randomness. Your actions are randomly determined with some flexibility. Probably a good kids game. 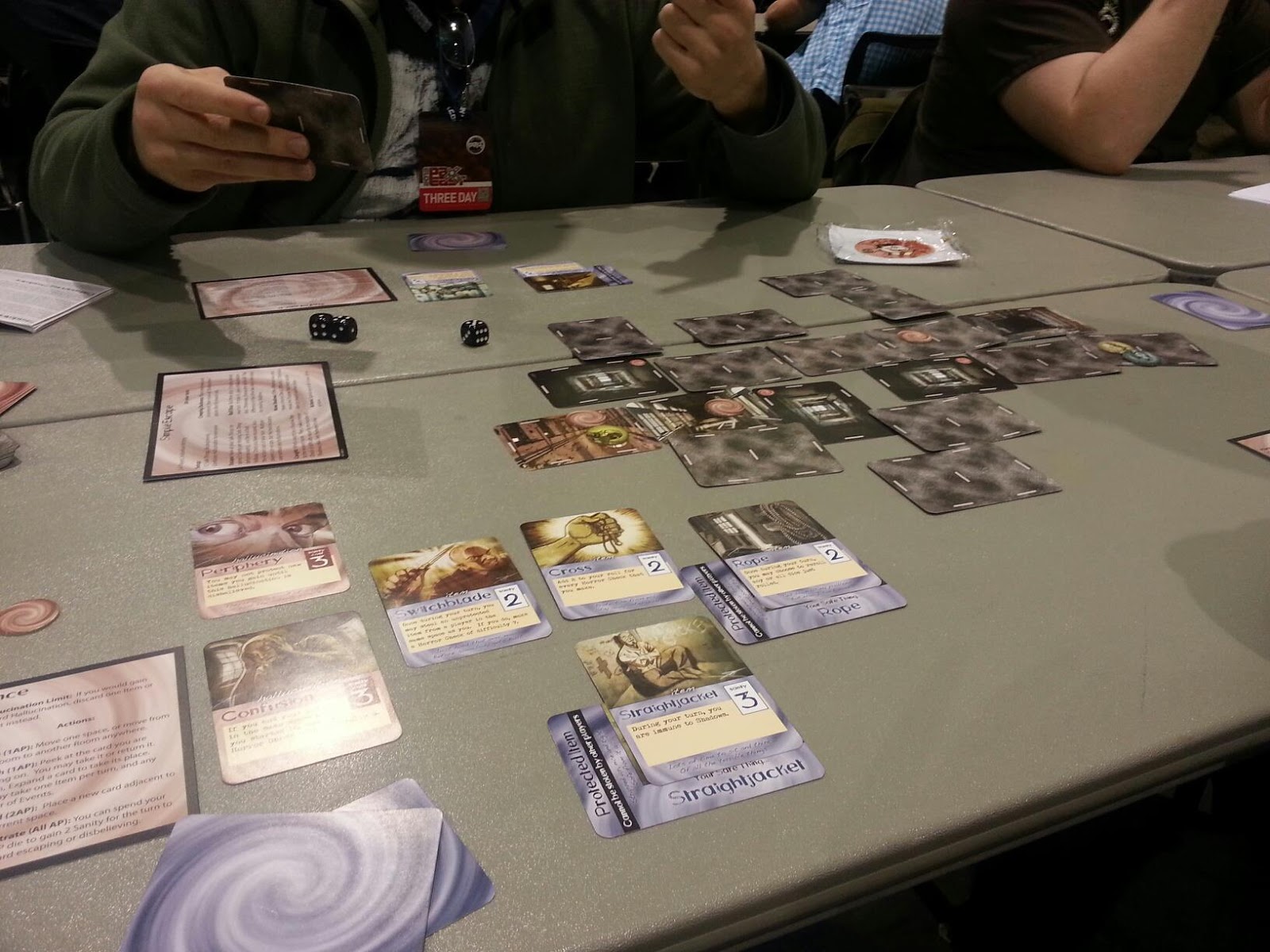 Sanitarium - Kind of wondering card based dungeon crawler. It was ok. Sort of meandering and aimless. Not really compelling. The game didn't really get exciting at all. Just sort of was. Felt tedious.

Skybridge x2 - A fun little abstract. Has elements of resource management and timing. It was fun building up the towers. The whole game revolves around the single bridge piece though. 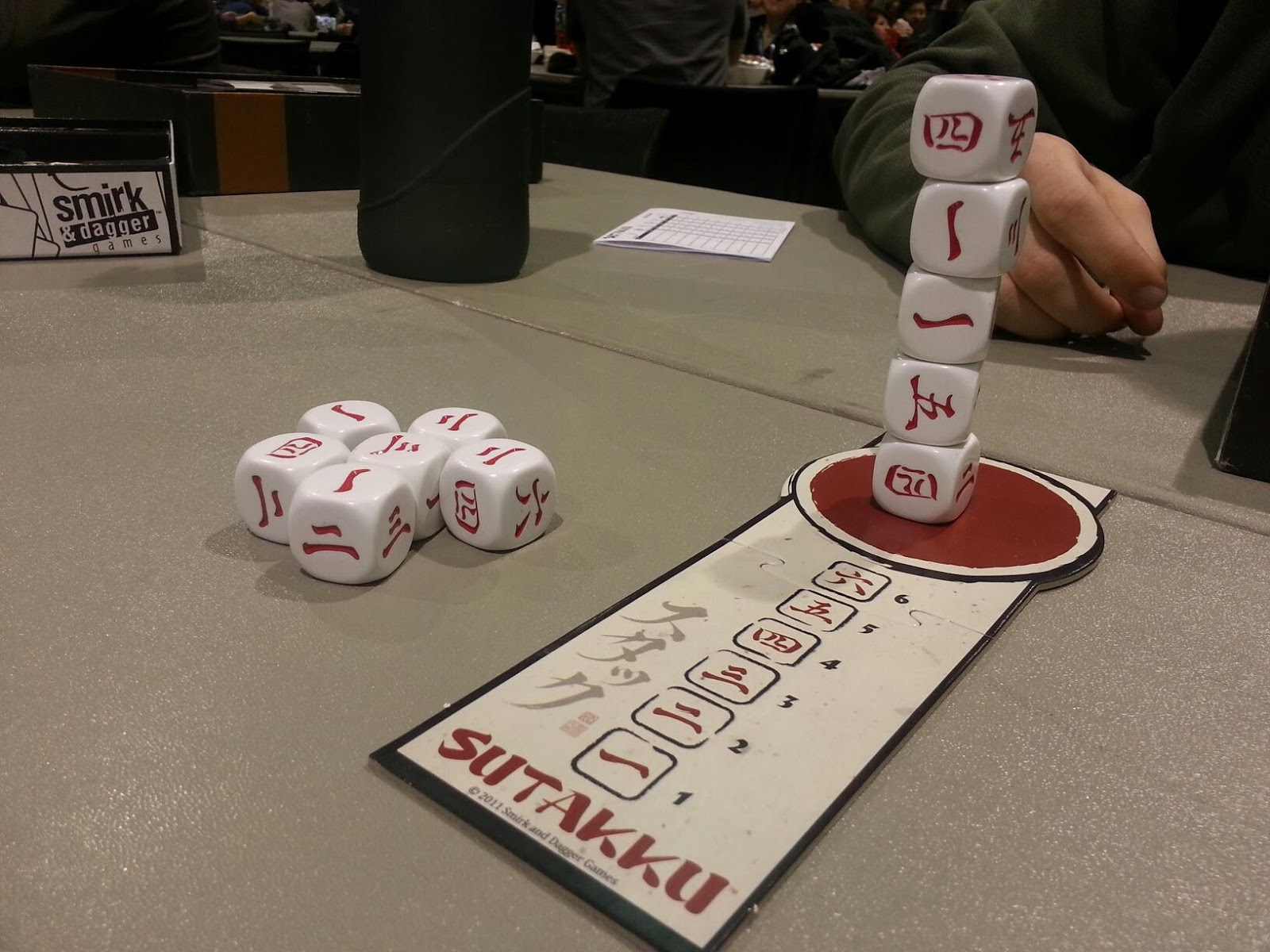 Sutakku x4 - A fantastic push your luck game. It's gimmicky, but it works so well. Stacking your dice, even though it has no gameplay effect, is a lot of fun.  And the Japanese characters and style add so much to the game. The array of bonuses and the mulligan rule really raise the game up a notch too. The dice especially are dice and meaty, and feel great.


7 Wonders - Confirmed my bias against this game. Halfway through someone mocked my lack of end game strategy, but I ended up in 2nd place out of 6 people by a good margin. 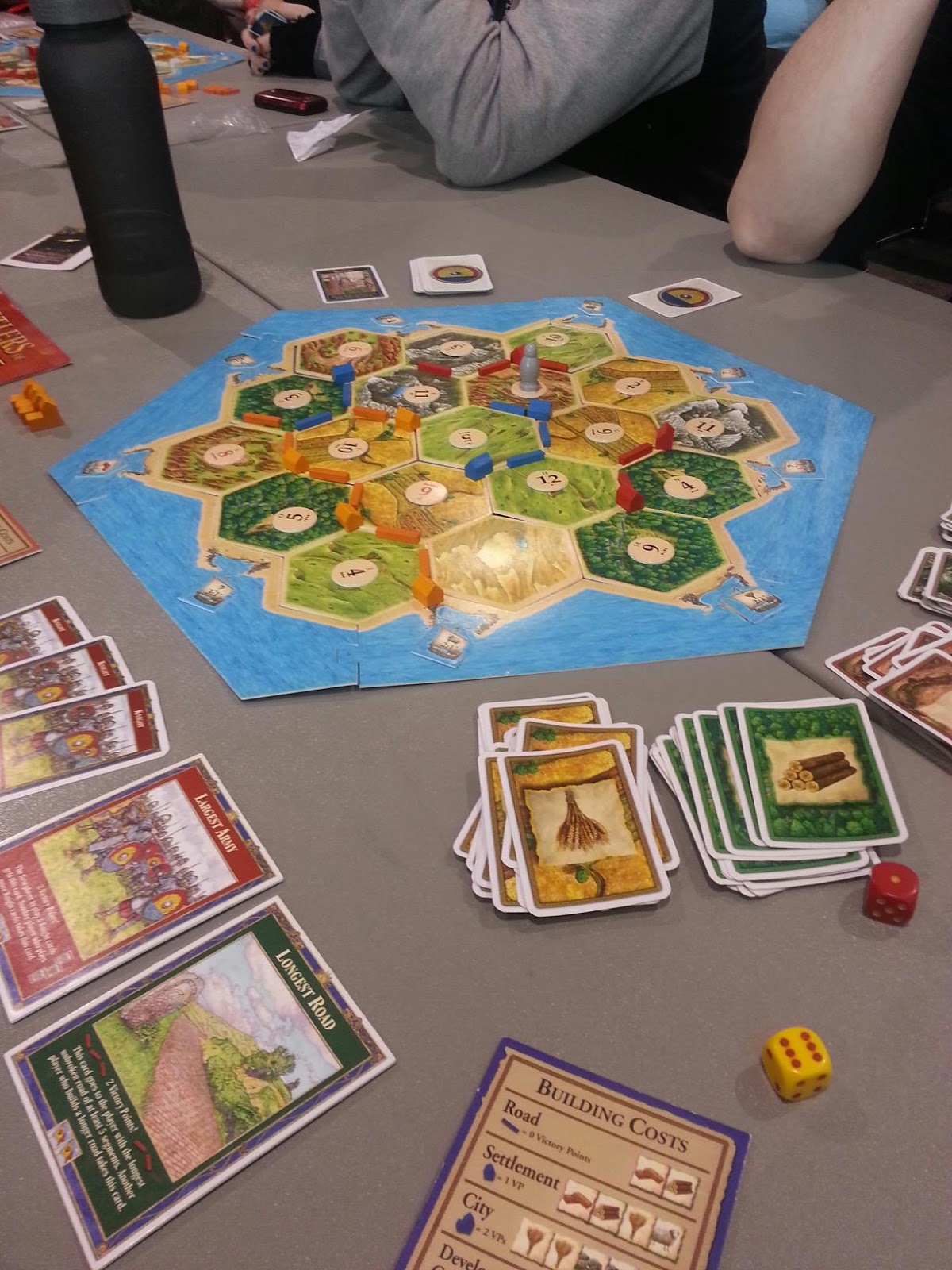 Settlers of Catan - it was a rough game for one of my friends. Roads, settlement placement, dice and everything was working strongly against her. She checked out of the game 4 turns in. Which always seems to happen to at least one person when playing Catan.

Roll Through the Ages x2 - We finally realized we can sell more than one good at a time. Curious to see if it causes the game to last any longer
Posted by CriticalBGamer at 8:42 PM