Today I was industrious.  I've fallen hardcore in love with X-Wing and went on a bit of a spending spree, against the better judgement of both myself, and those around me.  But how can you not fall in love with Star Wars?  Especially the unmolested original trilogy!  So I spent the evening being crafty and managed to create these fine cases for my figures and accessories.  I got the idea from this reddit post, and just went to town.

one for each side.  Which turned out to be just enough space with the other figures I plan on purchasing to round out my squads.  I'm hoping that when/if I buy the Slave 1 and Millenium Falcon they fit into the large spaces in the bottom left.  I wasn't sure what to do with the upgrade cards that sort of belong to both factions, as well as the movement templates, mission bits and other miscellaneous parts.  So for the time being they are still in the core box.  Which works rather well, and I'm likely to keep them there. 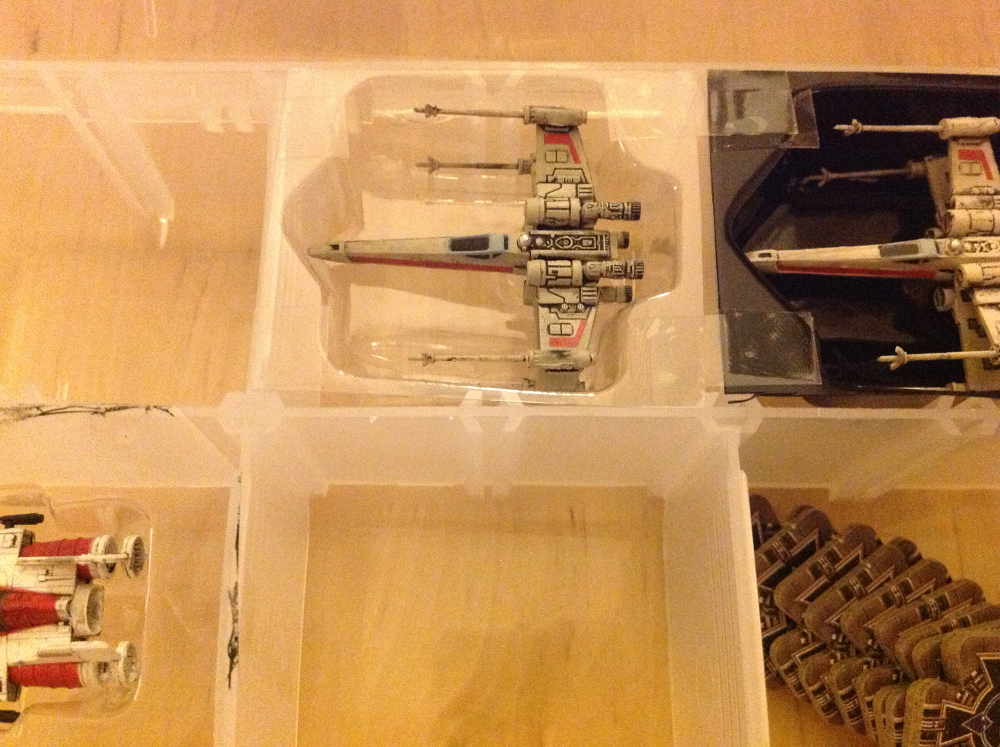 The X-Wings and A-Wings were rather straightforward   I just laid the mold upside down on top of the space I was going to trim it to, marked where I was going to be cutting, and sliced it up.  I tried an exacto knife at first, but just regular old scissors seemed to work best.  Perhaps if I'd cut the skirt away with the scissors first, the exacto knife would have been better.  A steadier hand than mine probably would have helped too.  Once I had them cut I just taped them in.  Ended up using some USPS packing tape I had lying around. 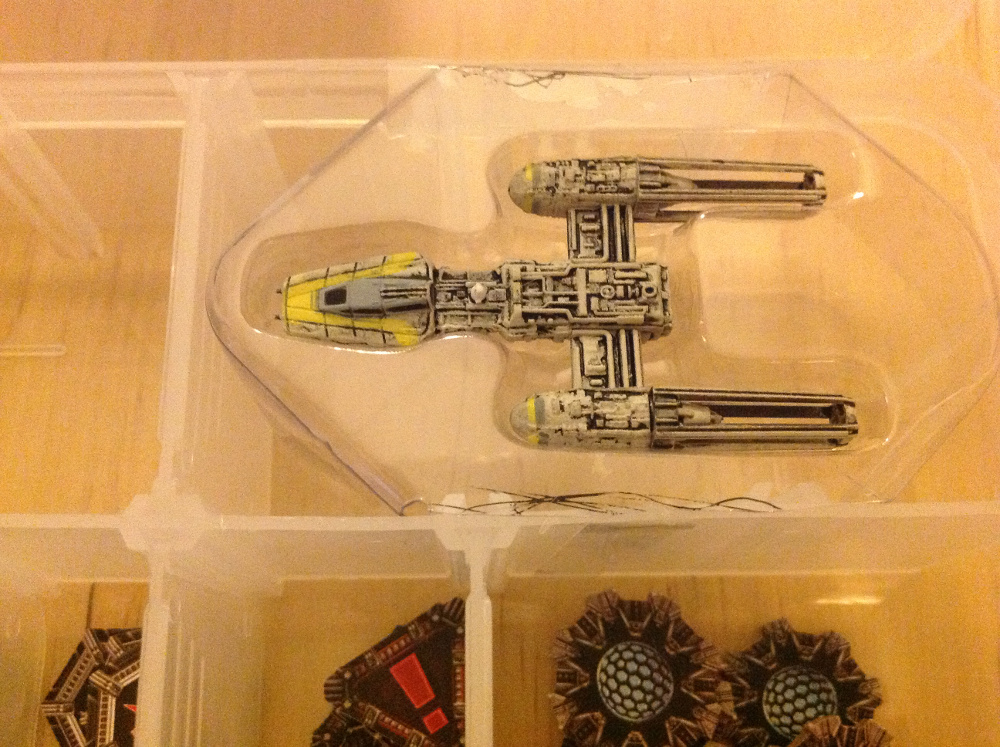 The Y-Wing ended up taking up the most space, a full 3 dividers in this box!  Thankfully I don't plan on owning many Y-Wings.  What was sort of nice was that I was able to get some of the skirt around the mold into the container as some added support.  All the others just have tape holding the molds in there. 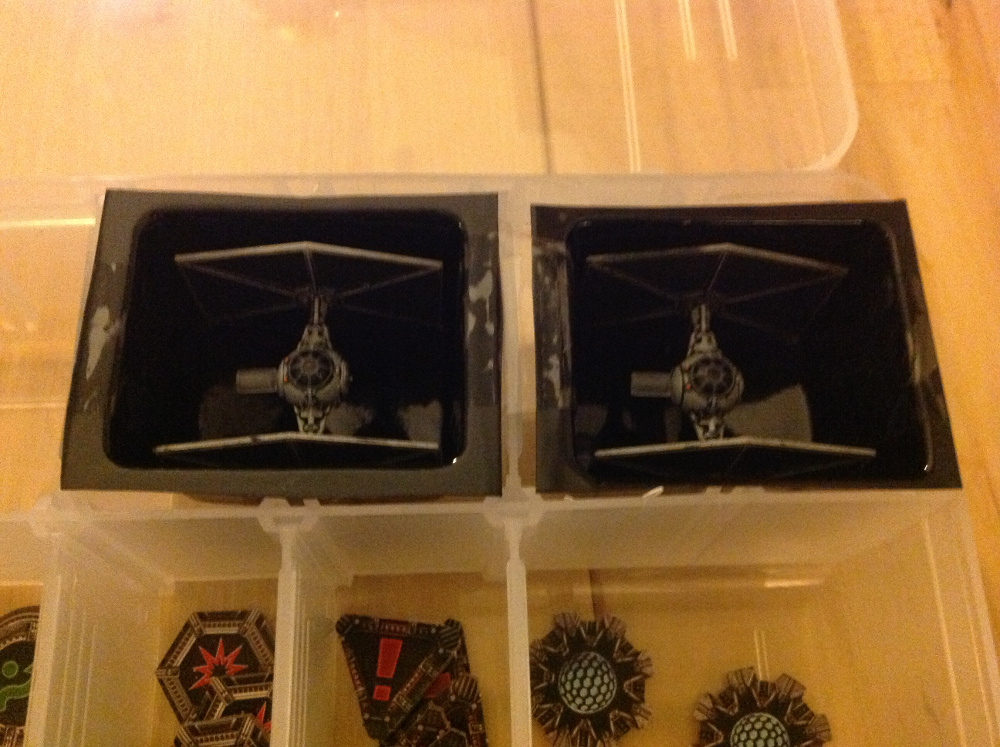 The Tie Fighters were a piece of cake too.  Especially because the molding had so many flat surfaces for me to stick the tape to.  The depth of the container was also perfect for these.  I was concerned they would bottom out. 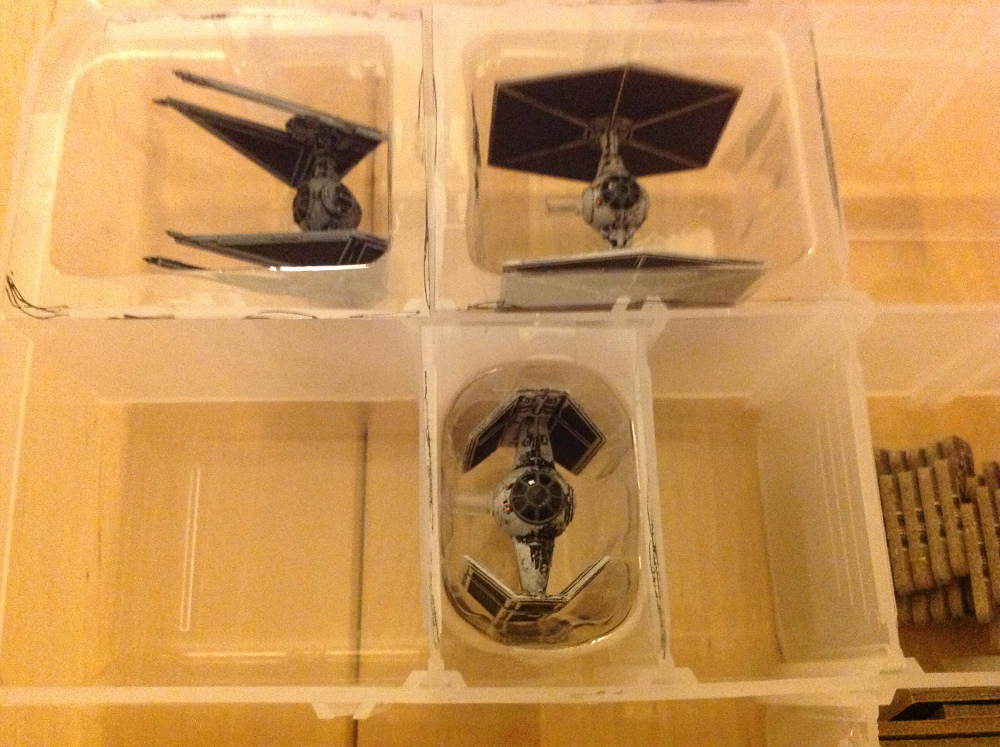 I seriously lucked out because the Tie Advanced fits in there extremely space efficiently.  It easily makes up for the fact that Empire needs to field more ships, which takes up more space.  In fact between the Y-Wings taking up 3 dividers and the Tie Advanced only taking up 1, it completely evens out the space my Imperial ships take up versus what the Rebels take up.  Even though by the time I'm done, Empire is going to have 2 extra ships on the Rebels.

So there they are.  If you have any questions let me know and I'll answer them as best as I'm able.

4/6/2013:  So I finally got the rest of the Imperial ships I planned on getting.  And while I was at my Friendly Local Gaming Shop playing the fantastic Core Worlds, I picked up a Slave 1 on a whim.  I really need to work on my impulse control.  So here is my finished Imperial case, at least until wave 3 comes out.  Then I'm going to have to get really creative. 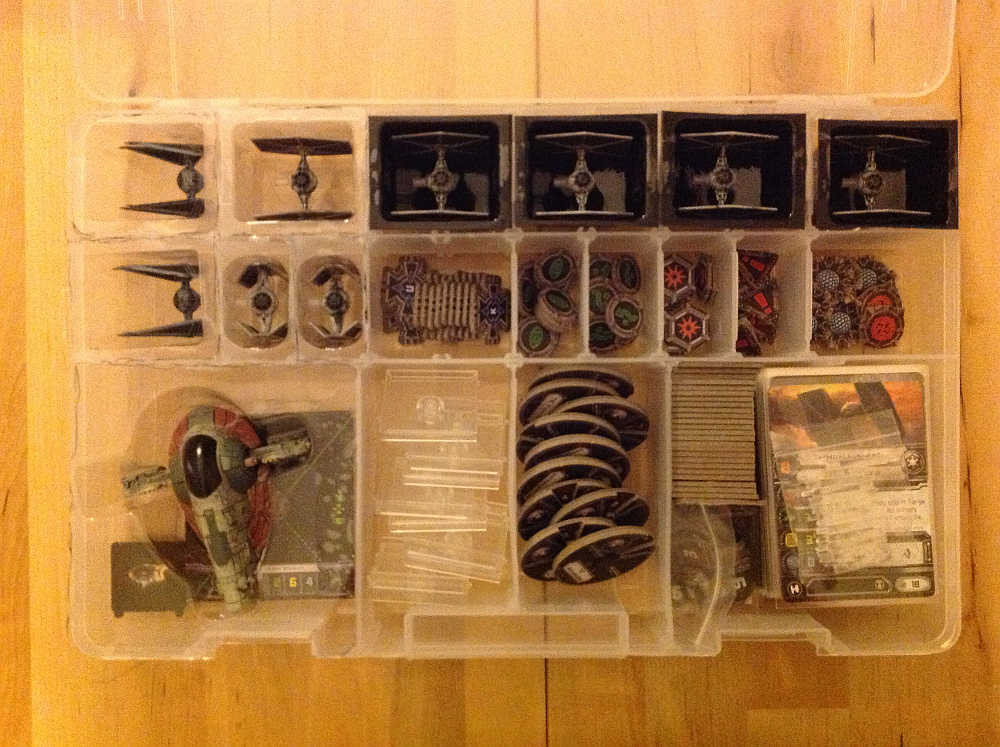 I'm especially proud of what I did with Slave 1.  Since I had such a large edge to work with, I taped it so that it would hinge, allowing me to keep the especially large bits under the molding. 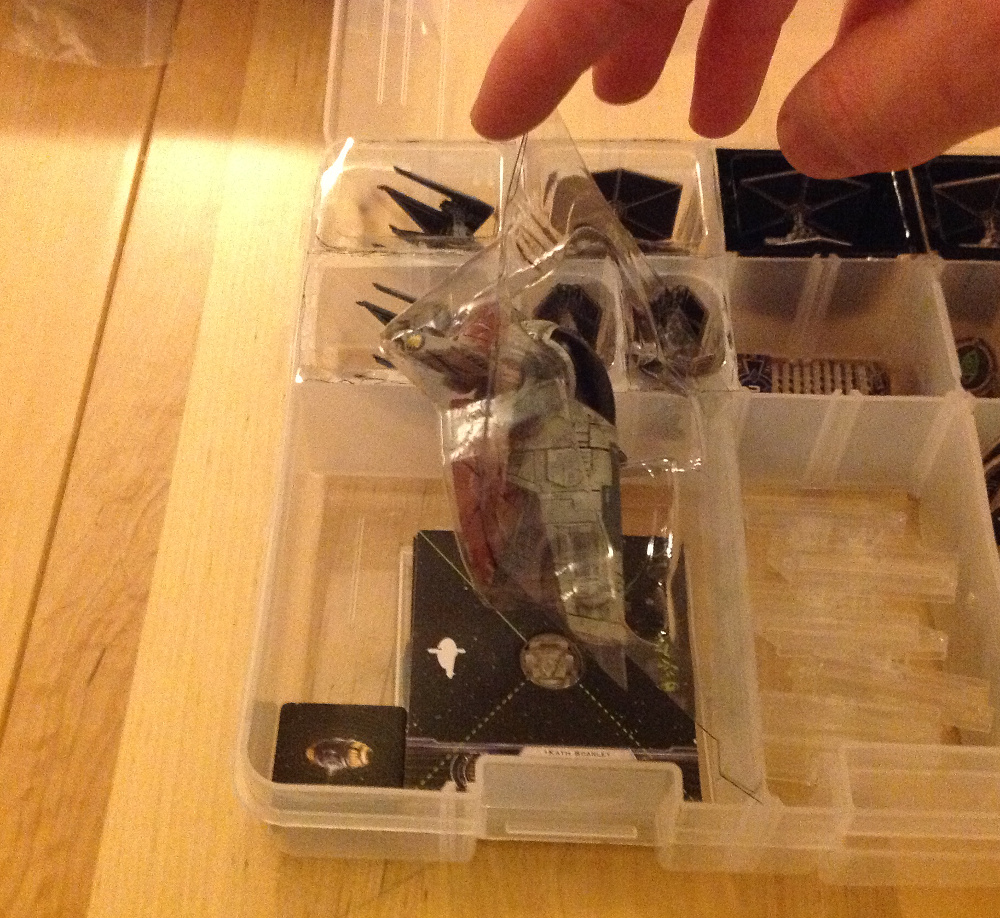 It took a bit of effort to get everything to work out.  The plano box had some divider guides on the bottom of the case that I had to cut out to gain that extra millimeter I needed to fit all the components under the mold.  Then it also had a guide on the lid that I had to cut off.  But I'm pleased with the end result.

No clue how I'm going to pull this off when I get the Millenium Falcon.

4/19/2013: So the Millenium Falcon showed up.  I ended up having to rearrange the bases and the movement dials.  I also wasn't able to do anything too clever with the insert. 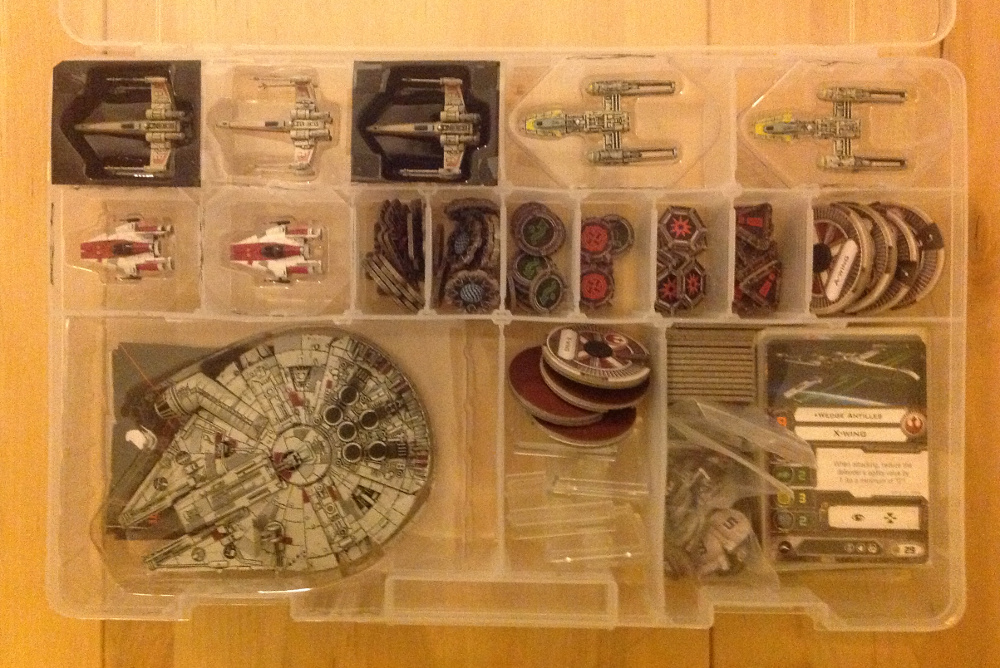 Mostly I just had to trim down the skirt.  Then I cut off the top edge, so only the left, right and bottom edges of the skirt were still attached.  Then I had to cut some slots in the skirt to match how the plano is shaped in the corner. 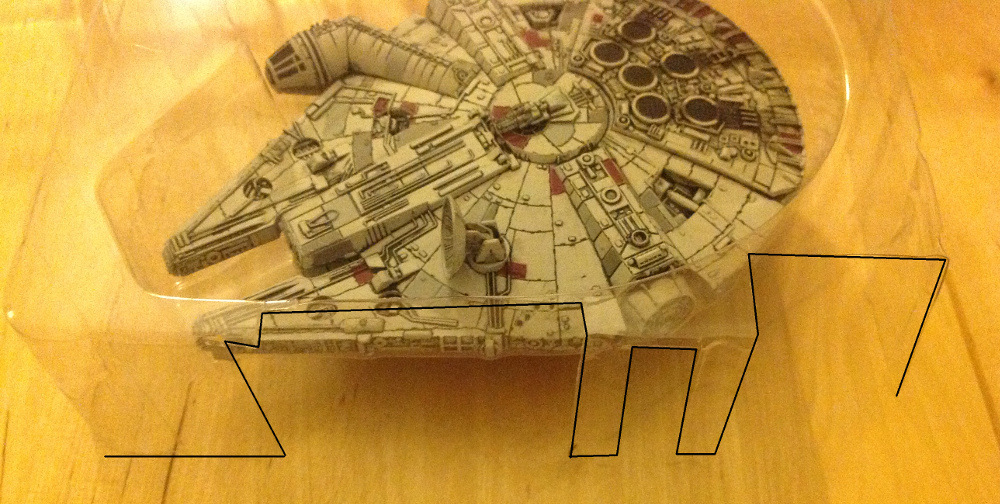 I was able to once again store the large base, post and pilot inserts under the model though, so that's good.  I'm toying with the idea of having all the ship inserts pull up like I did with the Slave 1, and keeping their dials, bases, and other bits beneath the molding.  Not sure how well that will work for some of the deeper inserts though.  Probably won't work at all with the Tie Advanced, unless I get really clever.
Posted by CriticalBGamer at 12:38 AM