So this is my best attempt at a session of Soviet Dawn, a game I've been utterly enthralled by, and plan on having reviewed by Monday.  This is going to be a bit higher level than other sessions I've done.  Partially because the gameplay of Soviet Dawn really isn't conducive to recording every action taken, and every die roll made.  But hopefully I can capture the key decisions that make this game fun.

So my strategy in the beginning is going to be to keep the Eastern Front back.  The worst event you can possibly get, is the Eastern Front rescuing the Czar!  I'm also going to try to improve my Political Level track, and hopefully get the Allied Front to go indecisive before they even become active.  I've been attempting to Reorganize the Red Army aggressively in the beginning, but all in all it feels like a losing strategy.  The only way to succeed is to roll a 6 on a 1d6.  I've wasted dozens of valuable actions attempting it to meager results.  So this game, I'm only going to attempt to Reorganize when I have a bonus to the die roll. 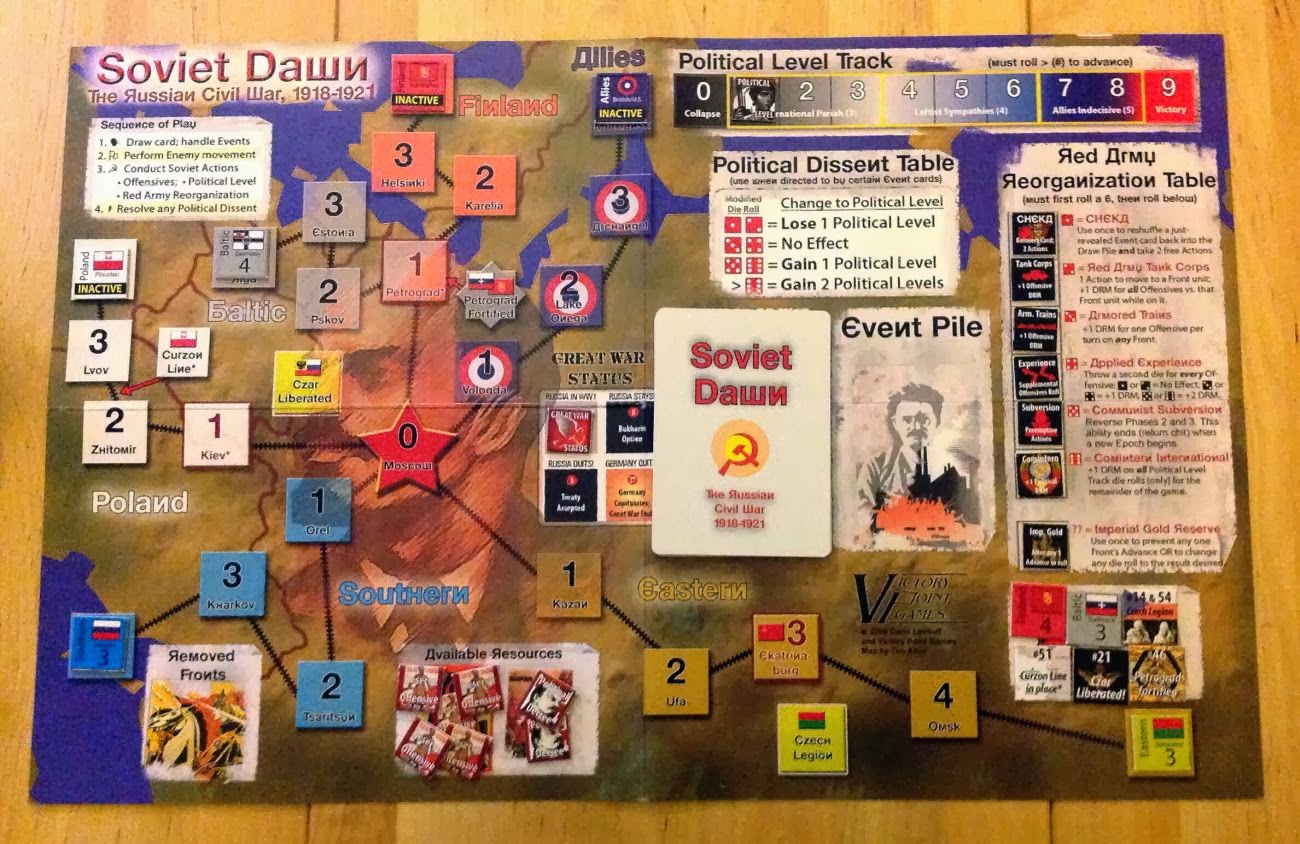 So the game is set up, now lets see how it plays out!

The first Event card is "Latvian Riflemen Support Red Cause!"  It advances the Eastern and Polish Fronts.  Thankfully, the Polish Front starts the game inactive, so it won't move.  I advance the Eastern Front forward into the 4 box.  This Event gives me 3 actions, with a +1 Die Roll Modifier (DRM) on Offensive actions against the Southern or Eastern Front, and a +2 DRM against the Baltic front.  Since the only front to have moved is Eastern, it's my first target.  Hopefully if I have any actions left over, I can attempt to raise my Political Level.

On the bright side, this event gives me 4 actions!  Also, due to a quirk in the rules, DRMs do not apply to Reserve Offensives.  I have 5 of them I can use over the course of the game.  So I think what I'm going to do is start chucking them at the Eastern Front.  Thankfully it only takes two, and I drive them all the way back to their 5th position on my first 2 attempts.  Now with my 4 actions, lets try my hand at Politics!


In the beginning, I only have to roll above a 3, but it gets more difficult as I proceed up the track.  But good news this turn, I managed to succeed my Political die roll twice, advancing to the 3rd position on the track.

The next several cards saw many failed Political actions, and the Baltic and Southern Fronts closing in.  The Eastern Front stayed dormant for a while, but got back in on the action.  I was able to pull off a single successful offensive against the Southern Front though, driving it back slightly.  But now the Baltic Front is right outside Petrograd, and that threatens my Political aspirations since if it falls, I lose a Political Level.  I have three actions for this turn, so lets try to turn back the Baltic Front!

My first roll is a natural 6!  I push the Baltic Front back, and decide to attempt to apply this good luck to Politics.  I succeed in two more Political Actions, raising my Political Level to 5!  It just got harder to keep pushing this up.

The very next card advances the Baltic Front into Moscow, ending my game.  They don't always go this short.  But when the dice is against you, there isn't much you can do.

To calculate my final score, I count up the cards that I didn't draw yet, including the cards that were set aside for the time periods I didn't make it to.  This came out to 39 cards!  That scores as a "Crushing Defeat!"  My worst score yet.


Well there you go, that was Soviet Dawn.  Sadly I didn't make it to the further eras in the game, and I never got to show you how the Red Army Reorganization works, or eliminating Fronts.  But at least Capitalism lives strong!  Now if you'll excuse me, I'm going to reset and play again...

Posted by CriticalBGamer at 11:26 PM