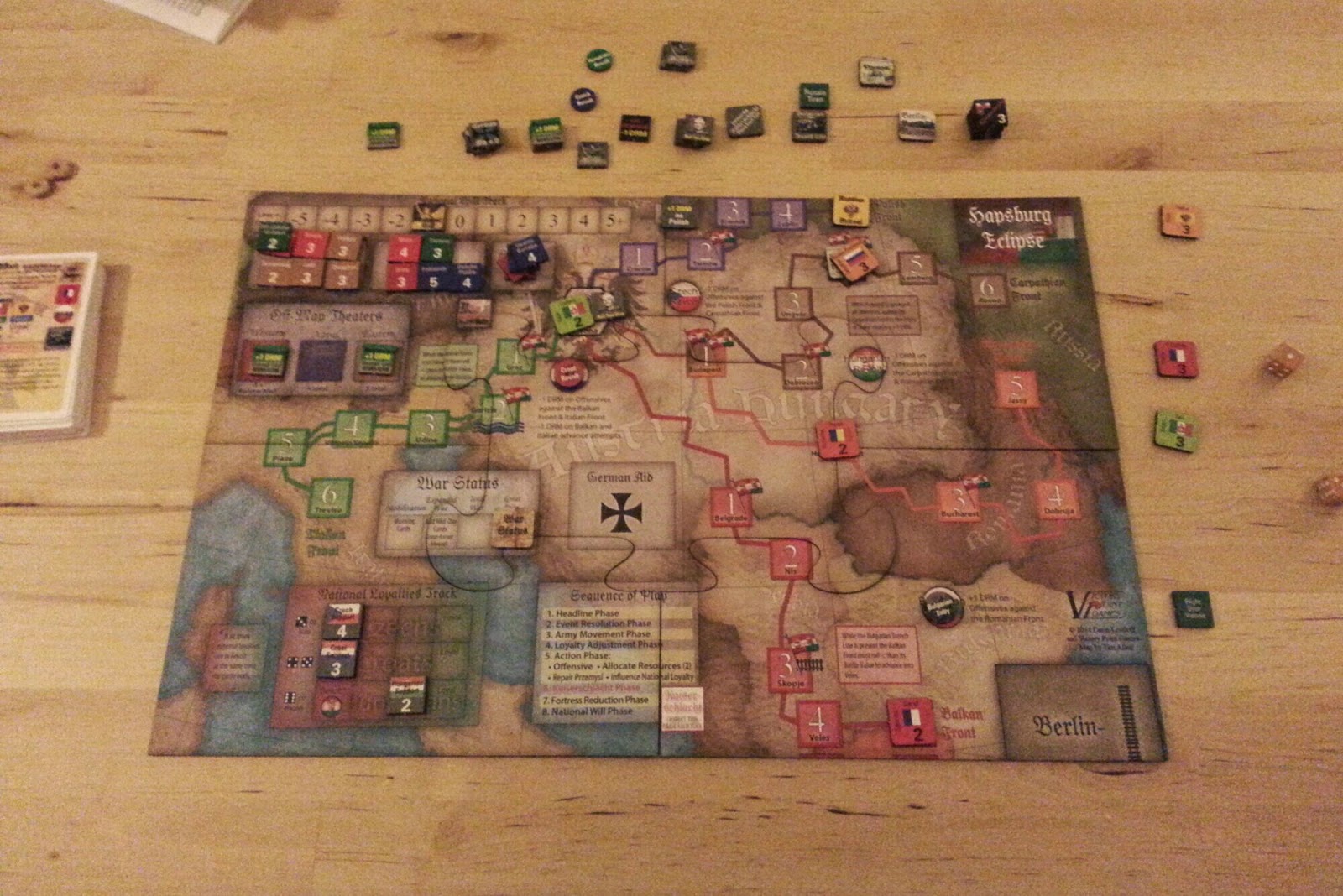 
The game feels like it gives you slightly more to do, with slightly weaker foes and a few more tricks up your sleeve.  Russia starts off vigorously beating down your door, but you have a fortress to help hold them off, along with prodigious amounts of German aid.  Eventually the Russians fade away a bit, and the Italians, Romanians and Balkans get involved.  But their armies are extremely weak, and the Italians especially start off needing to roll a 1 to even advance past the river on their first space!

Since your enemies are so weak, the only way they'll ever get a leg up on you is if you have some ethnic revolts which give them a bonus.  Which brings us back to the National Loyalty.  Overall the game gives a strong impression of Austria struggling just to hold itself together.  Austria is it's own worst enemy.


I've played a lot of Suburbia on iOS.  But I played it on cardboard for the first time this month.  It wasn't as mathy as I feared.  The iOS implementation does so much for you, so quickly, I think it made it all look harder than it really is.

I had a great time, and did not horribly despite pursuing a radically different strategy from everyone else.  Started slow, built up a ton of steam midway through the game, and then burnt out horribly exactly 1 turn before the game ended.  I played it again the next week with a different group, and still had a great time.  We began coming up with some pretty bizarre stories for our cities.  It's a really fun game to crack jokes over if you are with the right group.


It took a while, but I got The Agents to the table.  I have the Kickstarter edition with the plastic cards, and those are very different.  Not sure how I feel about plastic cards.  I had actually tried the print and play copy of the game before, so I got hung up on a few tiny things that had changed since then.

The core mechanic of the game is incredibly engaging though.  Every time you play a card, you have to help an opponent.  So getting more out of it than them is a great challenge.  Possibly undoing whatever advantage you gave them is also on the table.  What's even better though is giving someone an ability for them to use against the 3rd player.

I did misplay the first game however, because I assumed your money/score should be private information, and it's not.  So that sort of removed the possibility of ganging up on the leader.  I'm looking forward to playing it again.


I was going to wait until after PAX East this year to get more games.  But I saw Hanabi was back in stock so I figured I'd better grab it while it was available.  It's been a great time so far.  It's impressive how simple the rules are, but how fun it is.  It's definitely a standout title in the glut of micro-games.

The central premise is that you need to play cards in numerical order by suit.  The only catch is that you can't look at your own cards.  So everyone else gives you clues about what is in your hand.  Sometimes it's hard not to over share information when you give clues.  Other times it's fun to really enthusiastically tell someone they have a 4.  I struggle most with making faces while people are trying to decide which cards to scrap for more clues.  I find I have to look away while they make their decision, or I give too much away.  Other people have decided to just play their cards as quickly as they can before they pick up on body language.  It's a great time.
Posted by CriticalBGamer at 9:50 AM