A Slew of First Impressions

So this week I got older.  Apparently that entitles me to lots of free things from people.  And as luck would have it, I have a lot of great people in my life who knew just what I wanted.  Board games!  I was even lucky enough to have them around me to try out all the new games.  So to make up for not having a full review of anything, here are a bunch of first impressions. 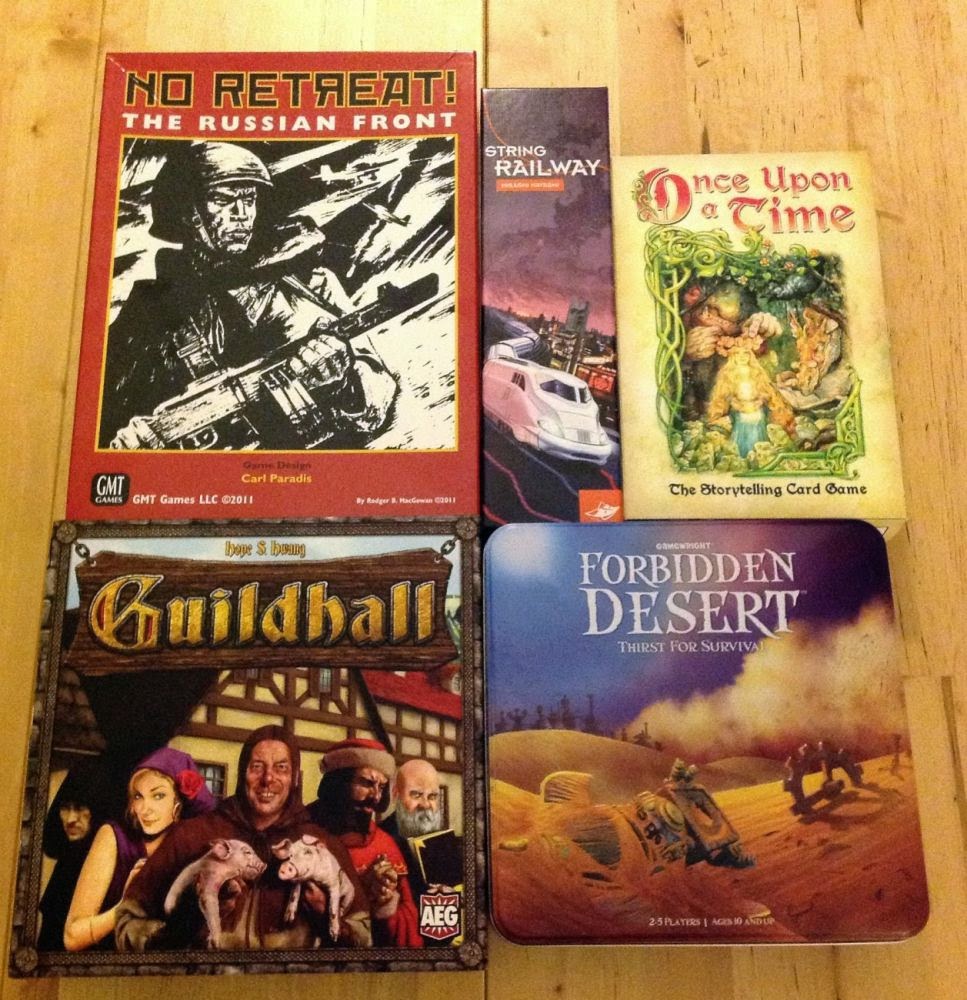 No Retreat: The Russian Front

This one is sort of cheating.  It was a gift I got for myself.  Getting it was quite the story, since it is out of print.  Or at least the GMT Deluxe edition I decided I had to have is.

So for those that can't infer from the title, No Retreat: The Russian Front is about the Eastern front of World War II.  It's an operational level game, covering everything between Germany and the USSR.  This is an old school hex and counter wargame.  It uses moving and attacking obviously, but other core mechanics are enemy zones of control, supply lines, and combat result tables.

But No Retreat spices up this old school recipe with a modern design sensibility.  The number of counters on the map remains small, usually around 10 per side.  Plus it also introduces a really fascinating card system.  The cards are an extremely valuable and flexible resource.  You have to balance between spending them on reinforcements, interfering with the enemy's attacks, and playing them for their events.

It took me about 2 hours to make it through the first scenario as a learning experience.  My friend was originally hesitant, as it looked like quite an intimidating capital 'W' Wargame.  But by the end of the night, the game really became second nature for both of us.  We found it incredibly accessible, and the core mechanics really meshed well, and felt like more than the sum of their parts.

I'd played Guildhall a few times at my FLGS, since they have a copy on their demo shelf.  Oddly enough they don't have any copies for purchase in the store.  Despite that, my girlfriend got me a copy, and I think this has a lot of potential for play with the two of us.

Guildhall is a pretty straight forward set collection game, where you are attempting to complete chapters of various guilds.  There are 6 different chapters, with 5 different colors.  You just play cards from your hand until you complete a set, and then use that set to purchase victory points.

What makes the game really fascinating is that each chapter has special abilities.  Abilities also get more powerful, the more members of that chapter you have.  Overall they have been really well designed, and allow for a lot of interesting combinations.  For example the Weaver allows you to put down extra cards directly into your guildhall.  This can allow you to quickly beef up another chapter before you play to it, catching people off guard.

I will say, it's very important you shuffle the deck well.  Extremely well.  The first time we played, we didn't shuffle anywhere near enough, and we hit a thick vein of Assassins.  We just kept killing each other's cards turn after turn.  Absolutely no progress was made.  We were starting to think we were playing the game wrong.  Then suddenly we didn't draw another Assassin the rest of the game, and blazed on ahead to a quick finish.

I desperately wanted String Railway after I saw it on Shut Up & Sit Down.  I was not disappointed.  It looks like more of a toy or a child's game.  But rest assured, there is plenty of game in here.

All you are trying to do is put down stations, and connect to them using your pieces of string which represent railways.  Some stations have special abilities.  But by far their most important feature is the player limit.  You can find yourself heavily restricted in a crowded game thanks to that.  With 5 players, the game seems to have an arc of there being very few scoring opportunities, then tons of scoring, then back to very little.  With 3 players things were significantly less crowded.

Overall I definitely prefer it with more players, and I suspect 4 might be the sweet spot, since 5 could take forever to get back to you, but 3 was just way too open and free form.  But regardless, the game plays quite quickly thanks to each player only getting 5 turns, and then the game is over.

String Railways also allows an incredible range of creativity, when you are trying to connect your strings to the stations in ever more convoluted ways.  Being just barely out of reach of something is frustrating, but when you just barely make it work, it's the best feeling ever.

Once Upon a Time

And another game I saw on Shut Up & Sit Down.  This one is an almost completely free form storytelling game.  You start with a hand of cards, and they have various story elements on them, like "King" or "Angry" or "The Thing Came Alive".  You need to tell a convincing story using these elements.  However, people can steal the narrative from you!  Either using interrupt cards, or cards that match something you've said, they can snatch control of the story from you, and begin telling their own story.  The first person to play all their story cards, as well as their special ending card is the winning.

This game was an absolute blast.  Some people had a hard time getting into it.  And you definitely need to be able to get into the spirit of trying to tell a good story, instead of min maxing getting the most cards out in the shortest amount of time.

But as the Game Master for my group's RPGs, I greatly enjoyed it.  It was a real challenge coming up with ways to use the story elements other people had created, but dragging them in a different direction.  I also really enjoyed adding a darker element to my stories, and doing horrible things to people's characters because that's how I roll.

I will say the box is complete garbage, and I didn't even try storing my cards back inside it.  Thankfully I had a spare card box lying around, and just used that.

The last game I got was Forbidden Desert.  This one I got mostly because I love Forbidden Island so much, and it looked different enough to be worth owning both, but similar enough to be easy to learn.  I was not let down in that regard.

While the mechanics are very similar to Forbidden Island, in that you are moving around, undoing the damage caused by an event deck, and hunting for items, the strategy is completely different.  It's extremely difficult to evaluate what the best move is, since most of the information is hidden from you.  You don't know where you need to go or what tiles are important to keep clear.  In some ways I feel like this can help the accusation that Forbidden Island or Pandemic are solvable.  I have a really difficult time seeing Forbidden Desert as ever being solvable.  But perhaps as we play it more that will change.

I can say I greatly enjoyed the added challenge of possibly dying of thirst in the desert, as well as the increased level of hidden knowledge.  Sure, that increased the level of luck in the game.  But you can't have it both ways, can you?  Either the game is going to be solvable, or it's going to have luck.  Deal with it.

And of course, the production values were simply stellar.  Over the top even!  The mythical airship you are finding parts for is fantastically produced, and is a full fledged toy in it's own right.  It can be a little tricky to take apart though once you've got all the pieces socketed in.  The sun dial I was especially afraid of breaking since it didn't readily pop back out of it's socket.

As a few gifts to myself, I also purchased Andean Abyss from the GMT Fall Sale, and Escape: Curse of the Temple using some saved up points.  So maybe expect some thoughts about those soon?

Hopefully next week I can get back to reviewing some more games.  I'm definitely looking to review Sekigahara soon after a few more plays, and Ottoman Sunset as well.  Fingers crossed!
Posted by CriticalBGamer at 11:02 PM

Email ThisBlogThis!Share to TwitterShare to FacebookShare to Pinterest
Labels: First Impressions, Forbidden Desert, Guildhall, No Retreat, Once Upon a Time, String Railways