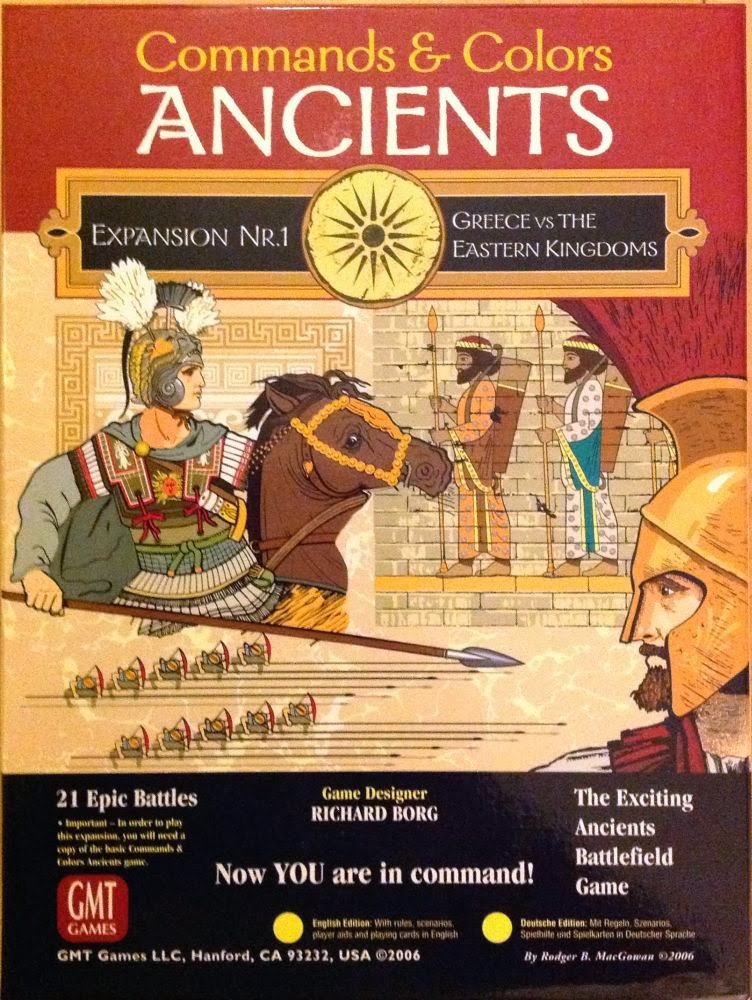 I'm wrapping up my second play through of all the scenarios for the first expansion to Commands & Colors: Ancients.  There is also a reprint of this expansion due any day now!  So I figured it would be a great time for a review.  I won't lie, I may have some rose tinted glasses for this game.  I'm quite open that Commands & Colors: Ancients is nothing short of my favorite game ever.  From the moment I first played it, I absolutely fell in love with it, and every game I play just brings me new appreciation for the system.

Greece & Eastern Kingdoms is published by GMT Games, and was originally released in 2006.  It adds 2 new armies, the titular Greece and the Eastern Kingdoms.  It also includes 21 scenarios, covering a span of time from roughly 500 BC to 200 BC.


The most prominent part of this expansion are the new armies.  One primarily represents Greece and Macedon.  The other represents a smattering of Eastern Kingdoms such as Persia, the Scythians, India, and occasionally one of Alexander the Great's numerous successors.  You will have to sticker many more blocks again.  Some people love this, and some people hate this.  Personally, I'm in the love it camp.  Nothing beats putting on some music, retreating to my man cave, and spending an evening sorting out the blocks and getting all the stickers applied.

This is also the expansion which "added" special units, although in latter editions of the base game, they have been back ported to a few scenarios.  So you will likely already be familiar with them.  Most special units have what I like to call a Lieutenant.  They get to hit on leader faces of the die, and they get to ignore a flag, as though they had a leader.  They just won't confer this bonus to the troops around them, unlike a full fledged leader block.

And most importantly, this expansion comes with 21 new scenarios for you to play.  And what a variety of scenarios it is!  It starts in 490 BC with the battle of Marathon between Greece and Persia.  It winds it's way through the battles between Thebes and Sparta, and various other civil disputes inside Greece.  It builds up with the campaigns of Alexander the Great, conquering his way through the known world.  All that build up explodes with the fantastically matched armies of his successors ripping apart the empire.  And then things are brought back around to the base game, with Rome showing up after the 2nd Punic War and conquering Greece.

How much complexity does this expansion add?


In terms of complexity, this game doesn't add much rules wise.  There are special units, which you may or may not be familiar with, depending on which edition of the base game you have.  There are some new terrain types, but nothing too crazy.  There are two new units, Horse Archers and Camels, but neither of them are anything special.  Just slightly different versions of what you are already used to.  Frankly, nothing added in this expansion actually increases the rule complexity of the game.  After all, it's pretty hard to beat all the special considerations Elephants already require.


All the complexity is added in the new tactical considerations.  What I love about this game is that is covers so much tactical history.  It goes from around 500 BC, when the state of the art in tactics was placing your best units on the right instead of the left, to 200 BC, where you have Roman Legions and their inherent flexibility facing off against Greek Phalanxes and their indomitable durability.  Plus everything in between, such as the development of Alexander's fantastic use of combined arms.  You get a strong flavor of lots of different time period's and kingdom's tactical styles.  You can get a bit of whiplash from it.  Especially after the base game where you mostly just have to learn how to fight like the Romans always fought, in slightly different ways each time.

How does this alter the character of the game?


This is pretty much textbook more of the same.  The essential character of the game remains completely unchanged.  No new phases have been added.  No new abilities have been introduced.  There are no new subsystems or mechanics.  It's just two new armies, with their unique compositions of light to heavy troops, and lots more scenarios which challenge you to expand your tactical toolbox.

Why do I need this, if there weren't any changes?


So you might be asking yourself, if there aren't really any changes, why do I need the expansion?  What is keeping me from just looking up the scenarios online, and just playing with my armies from the base game?

Well, aside from the fact that you may not have enough of the right units in an army to do that...nothing?  This is purely a content expansion.  And to its detriment, it's almost entirely content you can just grab from online.  If you don't mind substituting blocks, you don't really need to buy this expansion.

That being said, I strongly urge you to buy it anyways.  Because it is one of the best content expansions I've ever played.  A lot of care clearly went into designing each and every scenario.  And it also just feels good playing with the appropriate armies.  I like looking at my Greek armies and seeing actual Greeks.

How easy is it to start new players with the expansion?


There is pretty much nothing preventing you from jumping straight into this expansion with a new player.  Like I said, there is nothing really new in this expansion, it's purely content.  It's just as easy to play this as it is to play the base game.  However, despite that, I would still suggest starting with the base game.

Why start with the base game?


As I mentioned, the tactics in Greece & Eastern Kingdoms might be a little harder to stay on top of.  The scenarios change things up at a rapid pace, a pace that new players might not be able to keep up with.  Additionally, the scenarios involving Alexander the Great are some of the most one sided beat downs I've ever seen.  One scenario in particular, Jaxartes River, gives Alexander a 93% chance of victory based on the logged plays at CCAncients.net.

It is for those reason only that I would suggest you start with the base game for new players.  The tactics required are easier, and overall the scenarios are more event.


It's hard for me to believe I'm coming up on having played through every scenario in this expansion twice.  There are 21 scenarios, so that will make 42 plays when I'm done!  That's quite an auspicious number.  And it's never gotten boring.  Not ever.  Commands & Colors: Ancients is the one game, I have played consistently, at least once a month, usually once a week, ever since I got it.  I'm over 80 plays in, and this expansion especially breathed so much life into the game for me.  There is simply so much variety on display here.  The essential character of the battles covers so much ground, by the time you finish all 21 scenarios, you'll just sit back and think "Wow, I just played through 300 years of military history".  And it really feels like you did just that.  It's quite an accomplishment.
Posted by CriticalBGamer at 10:37 PM