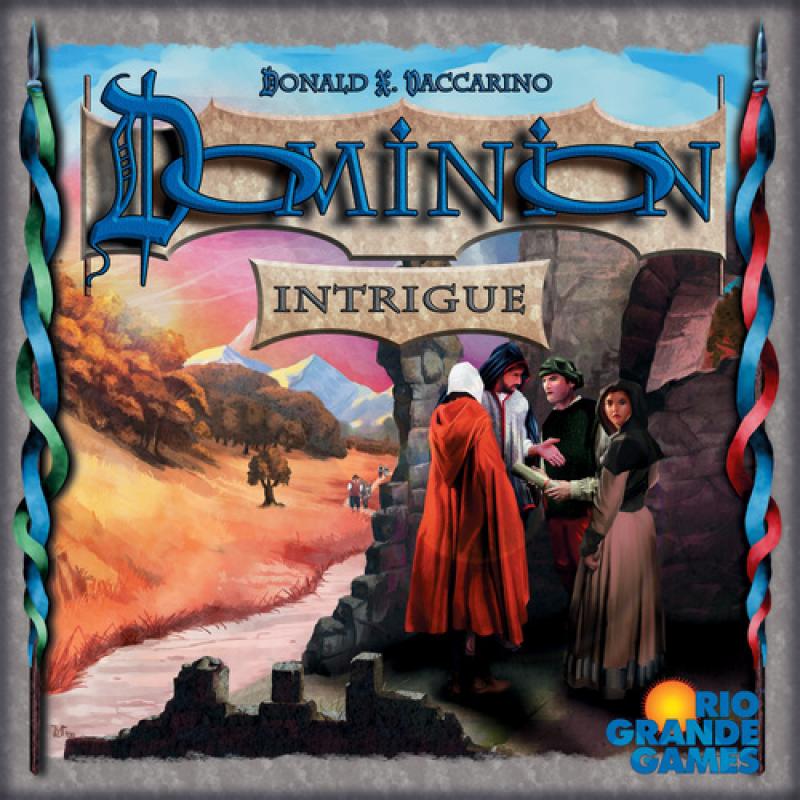 Dominion Intrigue was the second boardgame I purchased for myself.  It and Carcassonne I purchased before a large blizzard in 2010.  We had a week with nothing else to do but get to know those two games.  We got good at them, then we got competitive, then things turned ugly.

But back to Dominion Intrigue.  It was designed by Donald X Vaccarino.  It was published in 2009 by Rio Grande Games and was the first expansion of many to Dominion.  It retailed for the same amount as the base game, and came with just as many cards.  If you were new to Dominion, it fully doubled the amount of Kingdom cards you had to work with.  Which was pretty incredible in an expansion.  But aside from variety, what else did it do to the game?


Intrigue adds a few new mechanics to Dominion.  Actually they are more like themes.  You won't have to explain them to everyone like you would a completely new mechanic.  They build on the solid foundation of the base game.


The first new mechanic is cards that offer you a choice.  Many of the cards instruct you to select one ability or another.  For example, Steward, which allows you to draw two cards, gain two coins, or trash two cards.  Another new mechanic are cards that are multiple types.  Harem is both a Treasure worth 2 coins, and a Victory card worth 2 points.  The last new mechanic, which works well with the second, are cards that react to specific card types, or other cards played.  For example, Scout lets you look at the next 4 cards of your deck, and put all the Victory cards into your hand.  Including Victory/Action cards, and Victory/Treasure cards like Harem.  Or Conspirator, which gives you 2 coins, plus and extra card and action if you've played 3 actions already.

How much complexity does this expansion add?


One of the things that is fantastic about Intrigue is it adds no new rules or overhead to Dominion.  You won't have to fill anybody in on the new mechanics before you play.  There are no additional setup steps.  The cards say on them exactly what they do, and exactly what they are.  Just set the cards out, and let people read them.

Intrigue also comes with a full set of the basic Treasure and Victory cards you need.  This is useful if like me, it was the first Dominion box you bought, but also if you want to play with 5 or 6 players.  Although personally I would not recommend it, since the downtime between turns can easily grow to be quite long.

How does this alter the character of the game?


The best thing about Intrigue is that hands don't play themselves as much as in base Dominion.  With so many cards giving you a choice, you have a lot of interesting contextual problems to solve.  The most classic dilemma is choosing between extra cards or extra coins.  One of my favorite cards from this expansion is Wishing Well, which allows you to draw a card, and gives you an extra action.  Then you name a card, and if it's the top card of your deck, you get to add it to your hand.  It's just a really fun card to play.

The recommended sets do a good job showcasing what the expansion is all about.  The first set has a lot of very interesting synergies between the card types, and the actions that react to them.  For example Iron Works allows you to gain a card costing up to 4, then gives you an extra card, action or coin depending on the type of card you purchased.  Purchase a dual type card and you get two of those benefits!  Which is fantastic because that set has Great Hall, an Action/Victory card only costing 3.

The second set had a lot of really interesting low cost combinations.  Shanty town stood out the most from that set.  It gives you 2 extra actions, and 2 extra cards if you have no more action cards in your hand.  It was really fun to build long chains of cards utilizing it.

The third recommended set began to get vicious, with Torturer being a strong attack card.  It lacked any reactions, very few extra action cards, and no extra buy cards.  It really emphasized good deck balance, and many of the actions allowed you to draw extra cards.

Were the changes beneficial?


To me, the changes in Intrigue are all positive.  As I already said, the cards in this set do an amazing job of mixing up a game that can occasionally play itself.  Decisions are less obvious, and some of them are outright gambles, which is fun.  Also, thanks to having a choice, many of the cards you purchase in the early game transition well to the late game.  Like Steward, where you will primarily be trashing cards with it early on, but can switch to drawing cards or gaining coins later.

The strategies also become more complex and more varied beyond focusing on money, draws and actions.  The type of the card can matter a lot in building your strategy.  It adds an interesting new dimension to consider when playing.

How easy is it to start new players with the expansion?


As I said in my introduction, Intrigue was my first experience with Dominion, and it worked out great.  So great in fact, I almost never went back and bought the base game.  But the completionist in me insisted.  So clearly is very easy to start new players out with Intrigue.  There are actually a lot of people who think it's best to begin with Intrigue, because the base game bores some players away from Dominion entirely.  And first impressions are everything.  It's hard to get people to try a game again with the promise that it gets better.

I think what stands out most is the balance Intrigue strikes between depth and complexity, compared to other expansions for Dominion.  Every other expansion adds a significant new mechanic which requires some explanation.  Or it necessitates more advanced deck building skills.  I think only Hinterlands has it's new mechanic completely baked into the card set, requiring no additional explanation.  All the others do some wacky stuff, or are small expansions not really appropriate to be played alone.  So I find Intrigue alone would make are good alternative entry into the series.

I would only really suggest starting with the base game of Dominion if you are starting with players who are very new to board games.  Perhaps if it were their first or second newer style board game.  Aside from that, I say skip to Intrigue and don't look back.


I own all the Dominion expansions except for Guilds.  Some of them rarely get played, like Alchemy and Cornucopiae.  However Intrigue still regularly finds its way to the table.  It's easily in the top 3 expansions for Dominion, and certainly the easiest to introduce people to.  Plus it's the smoothest to jump back into when we haven't played for a while and are a bit rusty.
Posted by CriticalBGamer at 4:03 PM