Today I decided to play Field Commander: Alexander.  For some reason every time I go to meticulously document my play, my luck ends up atrocious and I die within 3 turns.  If I'm not recording for posterity I do fine.  So with that warning being given, lets begin.

I've chosen to play the Issus campaign, and I'm going to select the Treasurer Harpalus difficulty modifier, which reduces my income by one each turn.  I'm also choosing the Wide Plain modifier which adds 2 random units to the Issus location.  I have discretion as to my advisors, so I picked Callisthenes who gives you extra glory, and Parmenion who reduces the Battleplans of the enemy by 3 guy.

So right off the bat, Side and Ancrya, the two cities closest to me get reinforcements off their order rolls.  Probably the best results I could hope for honestly, just glad they didn't get walls or inflict damage.  The other two cities, Tarsos and Sidon, had their pots enriched with extra glory!  However the operations counter was "Go!" right off the bat, and both forces in the ops area rolled to go to Ancrya.  I was hoping to take Ancrya this turn, but it may not go so well.

Now I get to go!  I lucked out and rolled a 6 for my movement, meaning I only have to pay a single gold to move into Side!  Time for battle!

Thanks to my advisor, the enemy gets no Battleplans.  I chose Sacrifice and Regroup since that combination has done a good job of tearing down walls for me.  I sacrifice my Companion Cavalry, and make sure to regroup them.  I inflict 2 hits on the walls, and the rest is usually easy pickings for my Phalanx.


That is pretty much exactly what happens here.  One of their archers scores a hit which I absorb with my Rally.  After that I do my Sacrifice and place the Companion Cavalry on the Regroup token as a reminder that I get them back.  Then as I predicted, my Phalanx easily mops up 2 Archers.  I gain 3 Glory, and I decide to Raze this city.  I need to make tracks to Tarsos!


I managed to roll a 6 again on my first scouting roll, but only a 1 on the second.  I think so far though I'm definitely coming out ahead though.  I pay my 7 combined gold and proceed into battle.  My odds for Intimidating this city are good.  However it was one of the cities that ended up with extra Glory during the Enemy Orders phase, and I want it!  I only get it through battle, not intimidation.


As you can see, it was another easy battle.  My siege engine actually scored a hit against their walls this time!  Then their peltast managed to hit me, which I absorbed with my Rally.  I followed up by Sacrificing and Regrouping my Companion Cavalry again, for 2 easy hits, finishing off the city.

I'm having a hard time deciding whether I want to raze this city, or govern it.  I have 14 gold, and I need to move 3 spaces if I want to make it Ancrya.  That means I need to roll a combined total of 7 across 3 rolls.  Average of around 2, with a single 3.  I really don't want to stall outside the gates of Ancrya, because it already has 4 units, plus a wall.  I'm not sure how well I'd fair if another wall popped up, or I had to start purchasing troops away from a city.  On this map that costs double.  It's also tempting to rest here and build up some more.  It is still the first turn of the game.

I decide to play it safe and Govern Tarsos.  I would like to be able to Intimidate Ancrya into submission, and that gets harder as I raze cities.  I think it's also time to end my turn here, and build up some.  I have a lot of glory to play with!

I purchase 2 Insights and end up with Diplomats and Spies.  I was hoping for something to help with Darius at Issus, but these might still be good.  One adds 3 to all the Enemy Order rolls for the turn, and the other removes 1 Force token from each enemy Stronghold.  I also decide to purchase some Light Cavalry, and another Siege Engine for the taking of Ancrya.


I decide to use my Diplomats Insight during the Enemy Orders step, resulting in Ancrya doing nothing, and Sidon gaining glory!  Then the Enemy Operations is just 1 Force, so I decide to let it through.  If all goes well, there won't be many cities left for those forces to go to.

My movement rolls aren't awful.  I roll a 4, a 2 and a 5.  On my first roll I elect to leave my Archers behind.  I end up reaching Ancrya with 7 gold left.  I also decide to use my Spies Insight at this point.  Luckily enough, I manage to randomly discard the walls in both Ancrya and Sidon.  Alexander is having a great day!

It's time to try to intimidate Ancrya.  Except I realize I spent all my Glory on Insights, and have nothing left to Intimidate Ancrya with.  My Force Advantage of 4 is just not enough, and I must give battle.

The enemy gets to draw a Battleplan for this fight, and ends up with an extremely well suited Cavalry Battleplan, giving them a bonus.  Since they have 3 Cavalry units, this is going to hurt quite a bit.  I decide to go with Envelope, since they've lost their wall, along with Rally and Regroup.


I begin by using Envelope to inflict 4 hits, taking out both their units of Heavy Cavalry.  One of my Siege Engines actually manages to inflict a hit on their Light Cavalry as well!  In the midst of this their Archers score a hit which I absorb with Rally, and their Light Cavalry scores 2 hits which I take with my Siege Engines.  They are useless to me now anyways.  After this my Heavy Cavalry scores 2 hits, finishing them off!

After that, I decide to raze Ancrya to the ground, move to Gordion and claim my Prophecy!  Ugh, I need to discard an Advisor.  I always seem to get that one.  I decide to immediately discard Callisthenes since I've gotten some good use out of him.  Finishing the Gordion Knot early awards me extra Glory too, so I don't feel like I'll miss his presence too terribly.

At this point I start moving back towards Tarsos, to buy more troops and resupply.  Darius III looms large at Issus.  I think I need to buy some more Insights to take him down.  Hopefully something good, like the one that gives me 1 Rally per unit.  Or the one that causes them to do nothing the entire first round of battle!  Either one would be fantastic.


Well sadly I only get the Trap Insight which allows me to score D6 hits.  I also get Alexander's Horse, which gives him +1/+1 in combat.  That could be nice combined with the Lead Battleplan.  I decide to purchase more Cavalry, mostly to soak up some hits.  This is going to get ugly.

For the enemy orders, Sidon just gains 2 Gold, enriching the pot further if I Intimidate them.  The Enemy Operations is 2 Forces, which I let through since I'm planning on this being the final turn.  Fingers crossed!

I have 7 gold and 8 units.  It is enough to get me to Issus even if I roll a 1, although I would prefer to have some extra Gold so that I can buy more Battleplans.  I'm going to need lots of Charges to get the most out of my Heavy Cavalry.

The special rule of this battle is that the enemy starts with a Guards Battleplan to protect Darius III.  Between my advisor and their units, they get 6 more Battleplans, resulting in 2 raids, 1 deploy, 1 archers, 1 rally and 1 flank.  I decide to use Alexanders Horse in this battle, as well as the Battleplans Lead, Rally, Envelope and 2 Charges, spending the last of my gold before they can raid it!  It is my hope that my Trap insight deals enough damage to give me a Force Advantage, that I can then use to Envelope for further damage.  Fingers crossed!


I managed to roll a 6 for my Trap Insight!  I use it to kill their Peltast, Archers and 2 Heavy Cavalry!  Off to a great start.  Unfortunately they have a Rally, and I forgot their deploy gave them an extra unit.  So their Peltast is going to be sticking around, and neither side has a force advantage yet.  Oh well! 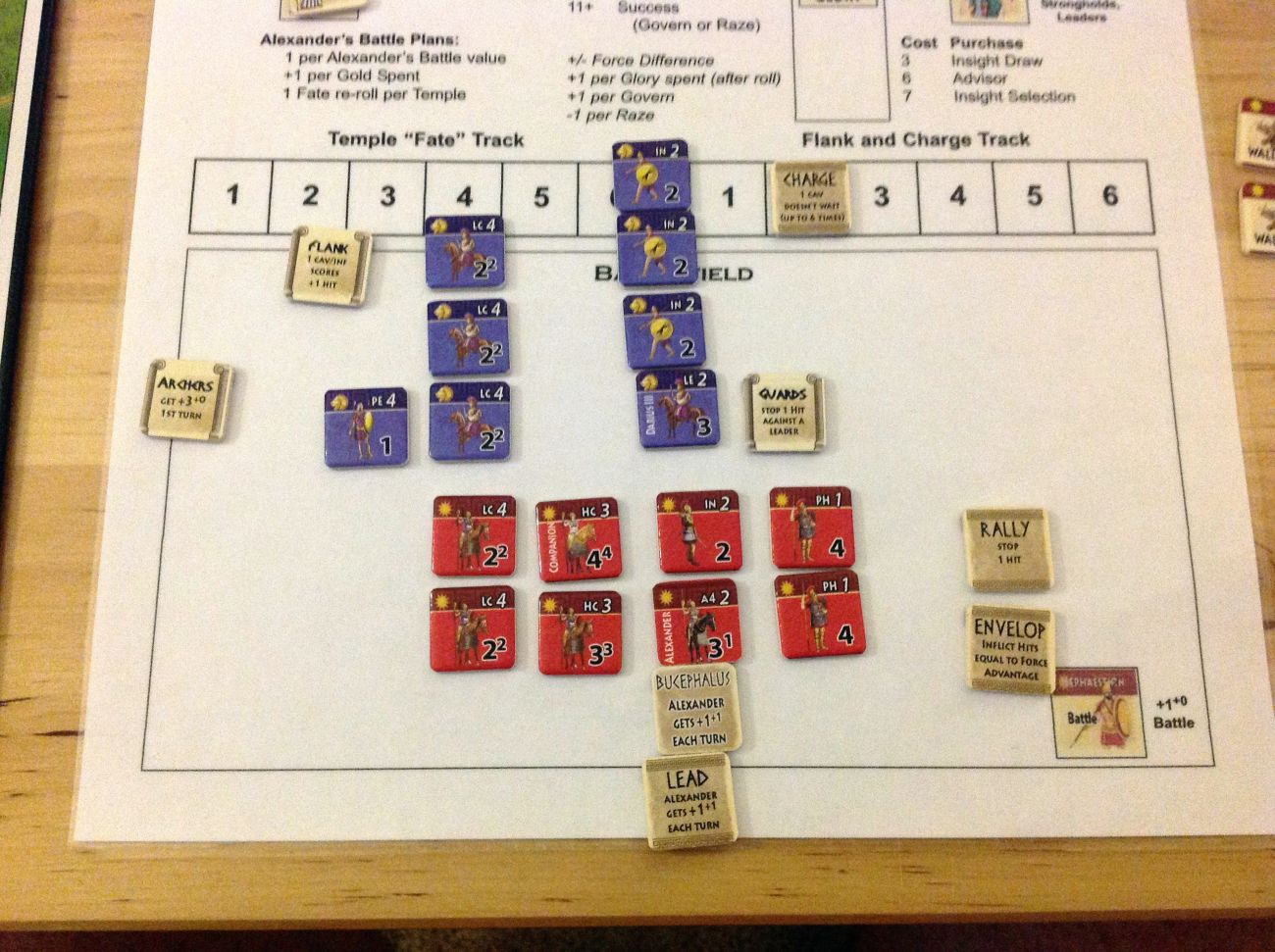 Many hits are exchanged during the first round.  Absolutely all the Light Cavalry on both sides misses.  However my Heavy Cavalry does well, as does my Infantry and Alexander.  Even my Phalanx manage a hit per unit.  On the enemy side, One of their Infantry manages 2 hits thanks to their Flank Battleplan.  I had entertained the notion of having Alexander go toe to toe with Darius, and saved my Rally in case Alexander gets hit.  Between his horse Insight and the Lead Battleplan, his stats a 5/3.  Good odds for cutting through the guards and Darius in 2 turns.  But I chickened out at the last minute. Time for round 2! 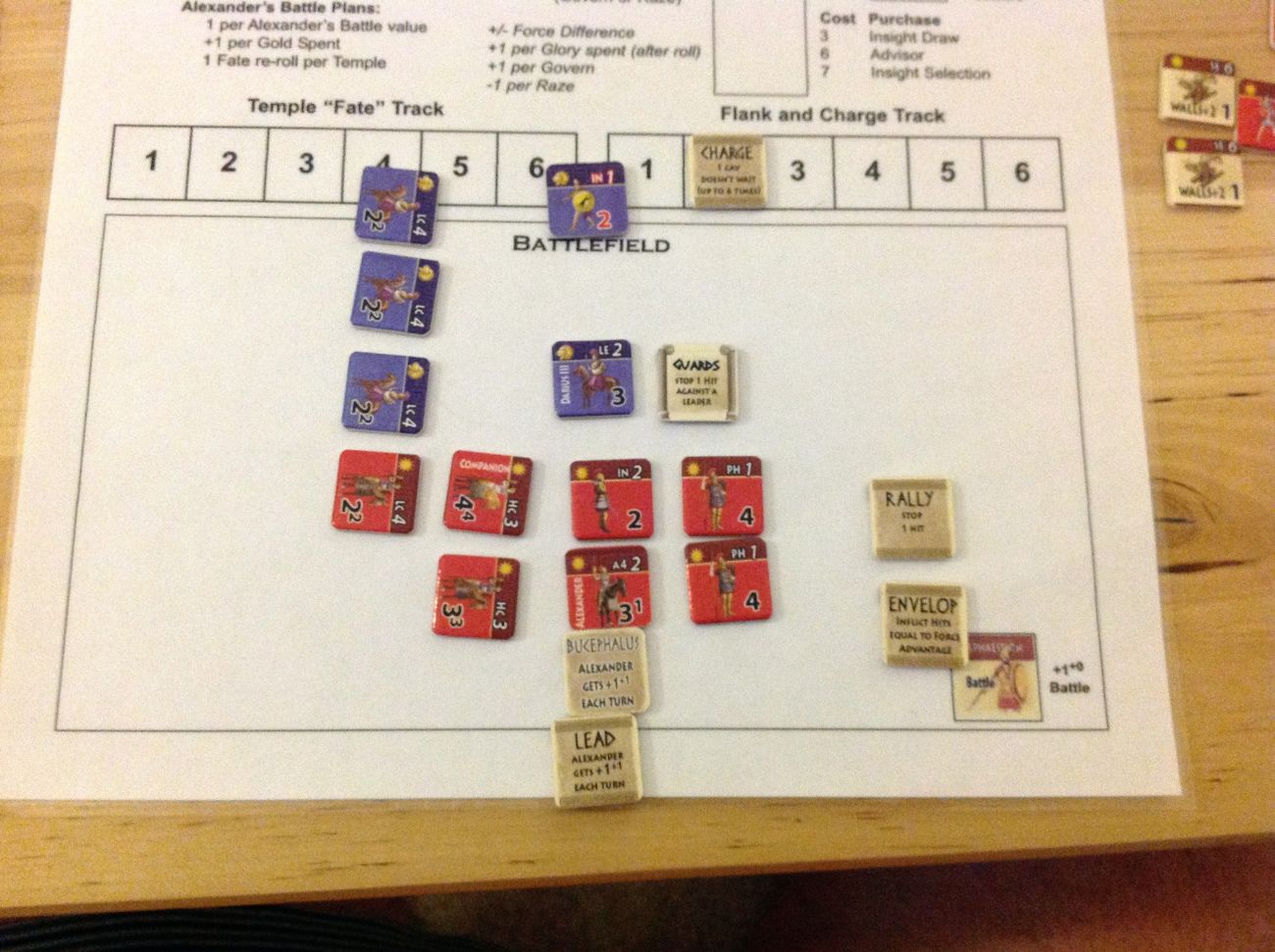 All their cavalry must skip this round, however I charge with both my Heavy Cavalry, managing 2 hits.  Darius scores a hit, and my Phalanx collectively score 2 more.  Now is time to end this with a timely Envelope.  I deal 5 hits thanks to my Force Advantage, taking out their last Light Cavalry, and causing Darius to flee the field.


I decide to Raze Issus because I'm flat broke and want to end the game this turn before I lose more points lazing around.  I take my 12 gold and use it to move on Sidon as quickly as possible.  My first roll is a 1, and my army is rather large, so I drop my Infantry and my wounded Light Cavalry.  All Sidon has is a Chariot and no Walls, so I'm not worried.  My next roll easily gets me there, and it's time to crush!


The enemy gets no Battleplans, so I just pick the Envelope plan, and immediately crush them with my force advantage, earning me the extra glory that had enriched the space.

Before the game is quite over, I decide to Govern Sidon, and build a City there to maximize my points.  So lets see what my final tally is!  I ended up with 34 Victory Points, my highest yet!  However, if I use the Immortality Point system, I scored 144.  Which is a bit below my previous best.  What really hurt me was Razing so many areas.  I would have gotten away without razing Tarsos, but better safe than sorry!  But there was definitely a need to move quickly since the "Go!" operation came out so early, beefing up Ancrya quite a bit.  All in all I think that was a very successful round.  My luck didn't run away just because it was being observed!
Posted by CriticalBGamer at 9:23 PM