Lately I've been feeling like Field Commander Alexander is too easy.  Playing it normally, I can usually conquer every scenario inside of 3 turns.  Especially if I go nuts, and raze my conquests every chance I get.  So today I decided I'd try Granicus with all the difficulty modifiers.  They are:

I may come to quickly regret this.

Turn 1 - Luckily, none of the enemy strongholds acted this turn.  However, enemy operations cost me 5 gold.  That was just about the worst thing that could happen, since I think I'm going to be very cash strapped this session.  It could end my first turn early.  But my scouting roll is a a 6, minus 2 is 4, which cost me 2 gold to move my 5 forces into Chaeronea.  Thanks to my advisor, the enemy gets 3 less battle plans.  It turns out their one battle plan is an archers bonus.  Since they have no archers, I lucked out again!  I get 4 battle plans thanks to the King Philip II special in this area.  I choose lead, rally, regroup and charge. Battle begins! 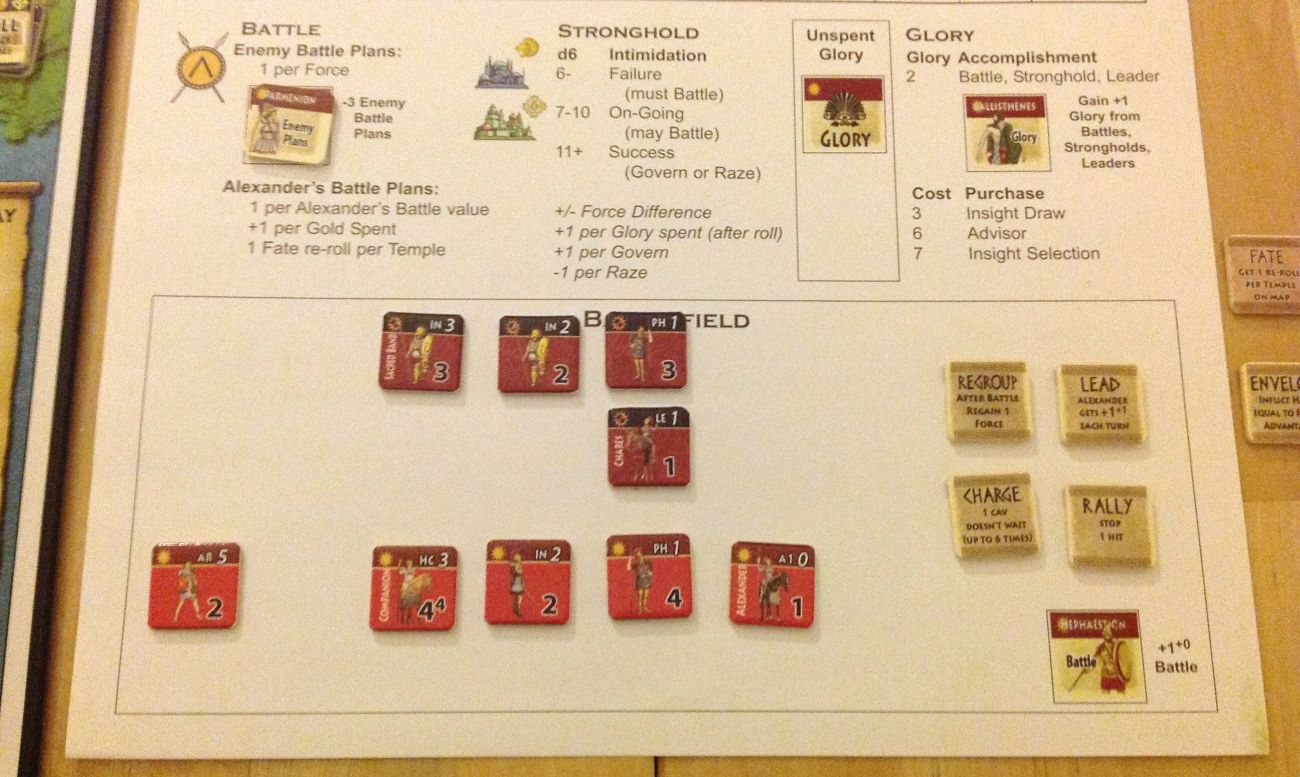 Lots of misses are rolled, but my Companion Cavalry strikes the first blow! My infantry manage a hit as well! My phalanx lands 3 outstanding hits, ending the battle almost immediately. With all his troops destroyed, the enemy leader flees the field. I was extremely lucky today. I take my two glory, and decide to govern the area since this may be a more protracted campaign. 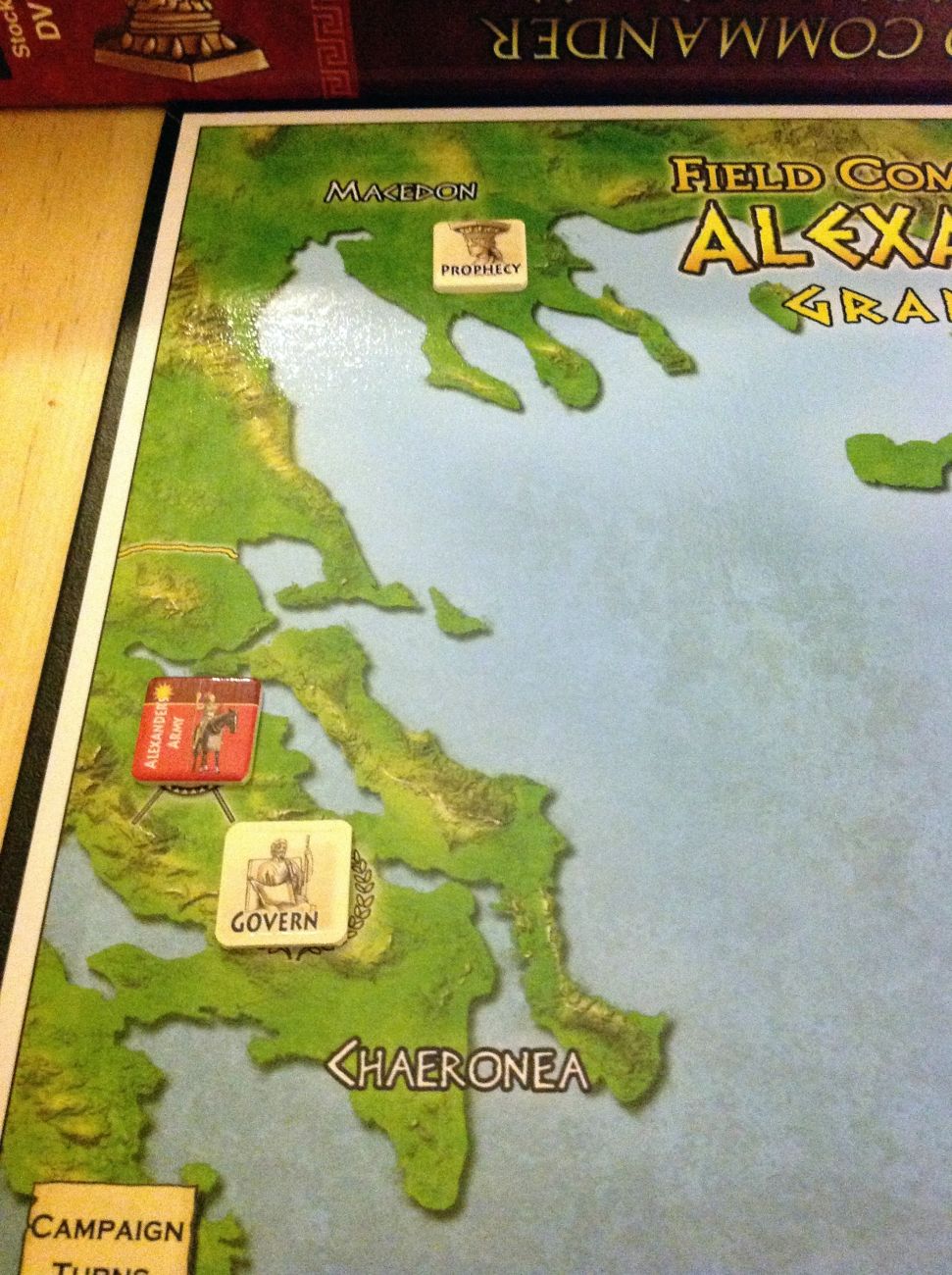 I'm going to attempt one more scouting roll though.  No need to settle down until I have to.  Rolling a modified 3, I'd need 4 gold to move, which I don't have.  I decide to ditch my archers, and pay 2 instead to move back to Macedon.  I gain a prophecy that requires me to raze a pivotal area in 4 turns!  This shouldn't be too bad with Granicus coming up.

I try to roll one last 6 for a free movement into Sestus but roll a 1 instead.  My turn finally ends.  I gain gold off of my winnings and governing.  It comes out to only 8 because of Treasurer Harpalus.  I want a temple, but decide against it since I'll need every gold I have to move across the countryside to the next battlefield.

Turn 2 - The enemy cities are a bit more active this turn.  More garrisons show up, as well as some good rewards in the form of gold and glory.  And I rolled a 1 for scouting, modified down to -1, resulting in me needing to pay 10 gold to move.  I only have 9.  So I guess my turn ends here.

Turn 3 - One more cities gains another garrison and 3 more forces get added to the operations cache.  I really hope Go! doesn't appear before I reach Halicarnassus!  I make my first scouting roll.  I hoping it's at least a 4, but it's 1 again.  At least this time I have the money to pay for it.  I leave behind my infantry to lessen the cost.  I can buy them again before battle.  I make my scouting roll to move into into Illium and roll another 1!  This is KILLING me.  Dice?!  I have to end my turn again.  I gather my income and purchase back my infantry.

Turn 4 - The enemy remains mostly quiet.  I rolled my 4th straight 1 in a row for scouting.  I must end my turn again.

Turn 5 - The enemy is mostly quiet.  I rolled lots of other numbers besides 1 for their order rolls.  Lots of 5's and 6's.  And now for my first scouting roll...2!  Modified to 0, so I must pay 8 gold to move into Illium.   Now I move to take on Memnon.  Or try to.  I don't have enough money for my other awful scouting roll of 2.  So my turn ends.  I failed my prophecy, so I must discard my advisor.  That's going to hurt.

Turn 6 - Lots of enemy activity this time.  Sardis builds another wall, and the other two cities get more troops.  And sadly, the enemy finally deployed their enormous stack of forces! This is NOT going well.


I'm definitely going to lose this one, but I at last want to take down Memnon.  Time for my scouting roll. Another 1!  Come on!  Once again I lack the funds to move.


Turn 7 - The enemy cities rally more forces, and also deal my army a hit.  I can feel the supply of enemy forces growing thin, which means if I have to draw for them again, it turns into hits for me.  Time for my scouting roll.  Anything but another 1!  And it's a 4!  That gets modified to a 2, meaning I only have to pay 4 gold to move this time.  Which is good, because I'm going to need as much gold as possible for the battle plans I'll definitely need.

So on to battle! Finally!  The enemy got an archers bonus, infantry bonus, 2 rallies, and an extra troop.  I think this is the end.  I choose rally myself, along with lead, charge and flank, paying 3 gold for the extra battle plans. And battle is joined.


The archer scores a hit, as do both our cavalry.  I wound my heavy cavalry, kill my already wounded infantry, and take the last hit with my rally. My 2 hits got absorbed by their rally, but I decide to use my flank to inflict one extra hit on their infantry.  Now their first infantry goes.  If I can survive this, I'm counting on my phalanx!  It's a hit.  Thankfully their leader misses.  I decide to take the hit with my cavalry.

At this point all I have left is my phalanx, and Alexander. I may have to go toe to toe with the leader and hope for the best. I'm expecting a lot out of my phalanx, but sadly it only scores 1 hit, as does their lagging infantry. I wound my phalanx, and take out their archers. 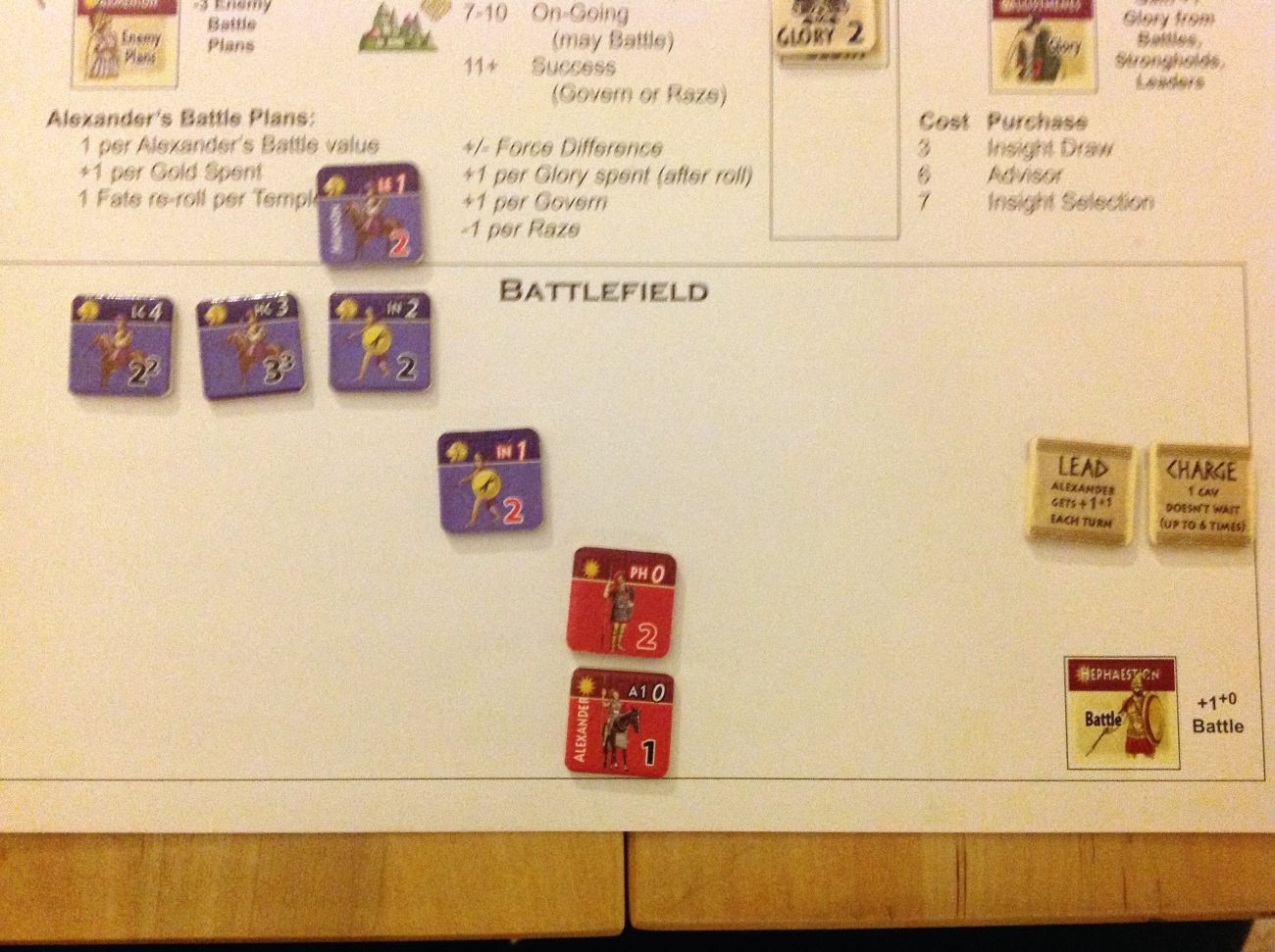 That means its all up to Alexander. He's going to challenge Memnon directly.  If I roll a 1, I can take down Memnon in one shot, and win the whole battle.  All those ones I was rolling earlier would come in really handy right now.  But alas, I rolled a 2, which is good for a single hit on their leader.

So that was an interesting experiment.  It's amazing how unsuccessful Alexander can be when he's robbed of his lightning fast marches across the countryside.  If I ever did this again, I think I'd attempt most of my scouting rolls with just Alexander and 1 infantry unit.  That way if I roll a 6, it gets modified to a 4, and I have to take 2 hits, killing the infantry.  But if I roll anything else, I can move much cheaper than I was forced to here.  I would just rush to next to my destination, then rebuild my army there on my spot.  It was just too expensive to drag 4 units that many spaces.  Each unit ended up costing me 8 gold each to get from Macedon to Granicus!
Posted by CriticalBGamer at 5:10 PM